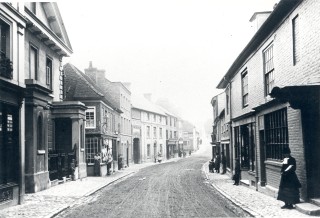 Tring, at the time of the poor relief
Hertfordshire Archives and Local Studies

The poor relief system in Tring was a scheme which gave bread to anyone who came and asked for it. It was given out in 3 sizes depending on the family and their requirements – half a loaf, one loaf, or even sometimes two loaves.

I was able to look at the ‘Bread Book’ records whilst at the Hertfordshire Archives and Local Studies office and see how much bread was being given out and to whom the bread was given to, which was very interesting. I found that in July 1820, 296 loaves were given out, whereas in November of the same year only 115 and a half loaves were given out. In January, February and March the amount given out was so small it could have been put on one page – in fact there were only four entries for the whole of January.

The reason for the drop in the winter months (which surprised me at first, as I would have assumed many more loaves would be given out as it grew colder and there was not as much food around) is because lots of people were admitted into the workhouse. The amount of bread being sent to the work house increased significantly during the winter months, which means lots of people were unable to support themselves, so had to admit themselves into workhouses.

It is also interesting to look at the actual names of the people who were going to collect their poor relief. Often the same names would pop up day after day, so obviously there were some families in real poverty. Having looked at a whole year’s period from June 1820 to June 1821 some names were very notable, for example; Thomas Rolfe, Thomas Smith and Thomas Ghost who seemed to come most days, summer and winter.

There are even some occasions where people would turn up two and sometimes even three times in one day – this really does show how some people were struggling for food. Sometimes other members of the person’s family would turn up on the same day, for example Sarah and Thomas Windmill would often alternate, as well as a number of the Baldwin family.

I wasn’t sure whether it was always family members, or whether people felt they had to use aliases and pretend to be a relative in order to collect enough bread to feed their families. There was an occasion where Thomas Rolfe’s name was written in the book twice, one after the other. This could mean that he had possibly returned soon after receiving one batch of bread to collect some more.

Evidently in the summer months some people were able to get some work (and many could manage to leave the workhouse), which was reflected in the ‘Bread Book’ records where names such as Sarah Windmill, would only surface once every few weeks. The same was noticeable with William Liddington. You could infer that perhaps they did have jobs, but sometimes needed that little bit extra food. These names would then crop up again in the winter.

Doing research like this really does show that some people were living in terrible conditions without much food, having to resort to Government hand-outs just to stay alive.