Ducking and drowning on suspicion of witchcraft 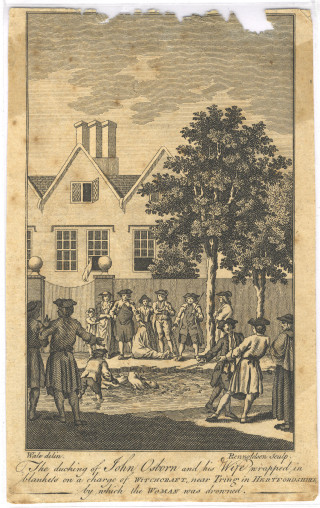 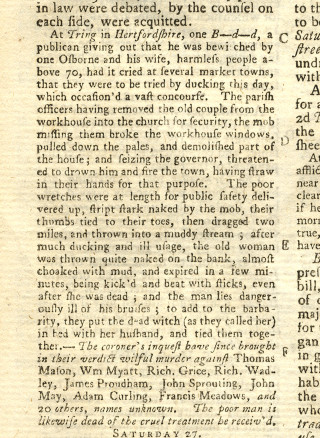 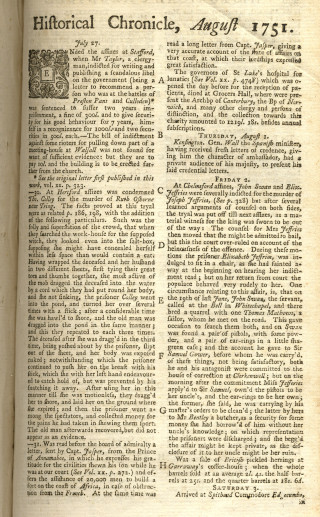 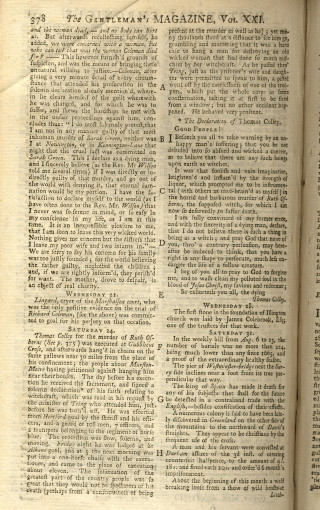 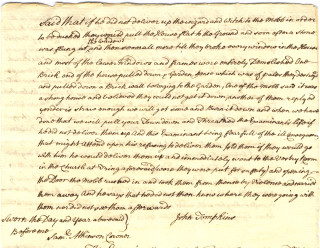 Although the Witchcraft Act of 1732 erased the crime of witchcraft from the statute books, it was harder to remove country people’s belief in witches as this case shows.

It began when copies of an unsigned paper began to be circulated around Tring:

‘This is to give notice that on Munday next there is to be at Long Marcon in the parish of Tring two Hill desposed persons to be ducked by the neighbours consent.’

The prospect of a public spectacle was guaranteed to bring the crowds. The fact that they were to be ‘ducked’ shows that they were being accused of witchcraft, even though this was no longer a crime punishable by law.

Ruth Osborn (like Jane Wenham) was a poor old woman on the margins of society who was begging for food from local farmers. Suspicion fell on her after she was turned away from a farm in Gubblecote, near Tring, and some of the farmer’s calves fell ill, leading to rumours that the old woman had bewitched him.

Ruth and her husband John had been taken into the workhouse when the mob assembled. The parish officers, fearful for the safety of the old couple moved them into the Church thinking they would be safe there.

The mob descended on the workhouse and not finding the old couple began smashing it up, breaking all the windows, pulling down one end of the house and threatening to burn it down.

Under duress John Tomkins, the workhouse master, eventually told the mob where the Osbornes were. The mob rushed into the church and dragged them out of the vestry. They then stripped them naked, tied their thumbs to their toes, wrapped them in a blanket and threw them into the pond.  Ruth was poked with a stick to make her stay under the water, and the water was so muddy that they choked on the mud.  She did not survive this ordeal, and after being thrown naked onto the bank was found to be dead.

Only one person was arrested for her murder. This was Thomas Colley, a chimney sweep, and he was found guilty and sentenced to be hung at the spot where the crime took place.

The night before his death he was forced to sign a declaration which was read out to the crowds who came to witness his execution. The intention was clearly to send out a strong message to the people that there were no such things as witches:

‘Good people I beseech you all to take Warning by an unhappy man’s suffering, that you be not deluded into so absurd & wicked a conceit as to believe that there are any such beings upon earth as Witches…   I am fully convinced of my former Error and with the sincerity of a dying Man declare that I do not believe there is such a Thing in being as a Witch. And I pray God that none of you thro’ a contrary Persuasion may hereafter be induced to think that you have a Right in any shape to persecute much less endanger the life of a Fellow Creature…   So exhorteth you all – the Dying Thomas Colley’

Did it have any effect?  An interesting insight into the attitudes of local people is given in the report of Thomas Colley’s execution which appeared in the Gentleman’s Magazine:

‘Many thousands stood … to see him go, grumbling and muttering that it was a hard case to hang a man for destroying an old wicked woman that had done so much mischief by her witchcraft.’