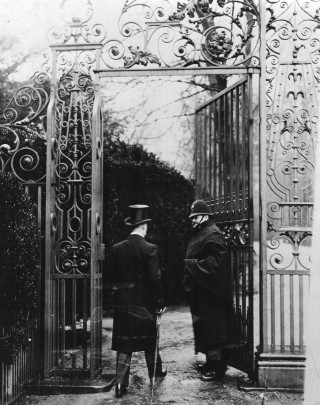 I have attached a photograph of Constable BOWYER, who was stationed at and lived at Tring Police Station.  He is opening the gates to what I think is Tring Park or is it Penley Manor.  I think the first. I do not know the date of the photo as Pc. Bowyer was at Tring for some years but would guess the 1930s. Why was it photographed – who is the gent in the topper.

Have now found a postcard of Tring Park Gates and now know this photograph was taken at that location.