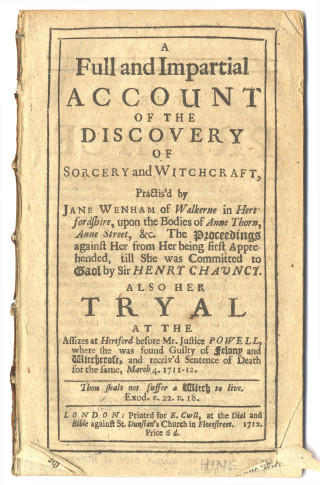 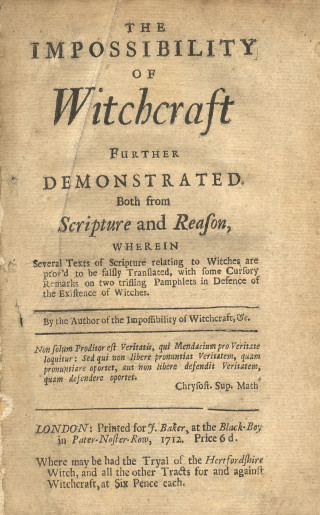 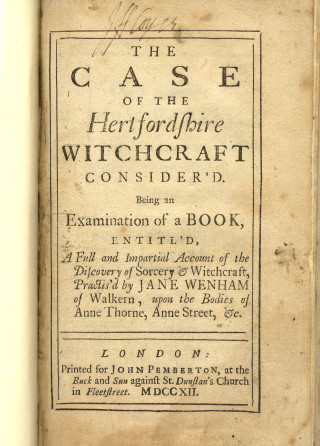 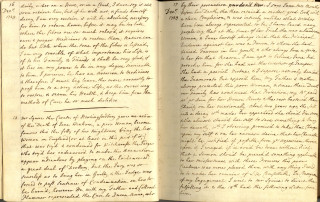 Jane Wenham lived in Church End, Walkern, near Stevenage. An elderly woman about 70, living alone, poor and eking out an existence on the margins of society, she fitted the stereotypical view of witches.

John Chapman, a Walkern farmer, had been concerned for some time about deaths among his neighbours livestock, and had recently suffered losses himself worth about £200. He suspected witchcraft and that Jane Wenham was the culprit.

One of his labourers, Matthew Gilston, then told Chapman that Jane had been begging for some straw. He refused to give her any, and she went away muttering. After she had gone he said that he had been unable to work and told a fantastical tale of taking off his shirt and running at great speed through a river, against his will – proof that Jane had betwitched him.

The farmer then went to see Jane, and called her ‘a witch and a bitch’. Jane, frightened for her safety, went to the local JP, Sir Henry Chauncy, of Ardeley Bury.

Chauncy didn’t want to get involved, so recommended that the Rector of Walkern, Rev Godfrey Gardiner should arbitrate between them. Revd Gardiner ordered Chapman to pay Jane 1s in compensation.

As Jane left the Rectory, via the kitchen, she passed 16 year old Anne Thorn, the servant girl. Soon after, Revd Gardiner, his wife, and Francis Bragge, Vicar of Hitchin, who was there at the time (and was to play a key part in the prosecution), heard a commotion from the kitchen.

According to Bragge they found Anne Thorn speechless and distressed, and she also told a fantastical tale of being forced to run over fields, climb gates and ford stream, all at 8 miles an hour.  She also had a parcel of twigs and dead leaves wrapped up in her gown – which she claimed an old woman in a hood had made her gather.  This was thought to be a witch’s charm.

Mrs Gardiner told her to throw the bundle on the fire and as it burnt Jane Wenham returned, saying that she had forgotten to speak to Anne’s mother about some washing the two women were to do at Ardeley Bury.  To the group in the kitchen, this was proof of her guilt, as the destruction of a witch’s charm was believed to make her appear.

The next morning, as Anne was returning home after delivering a message, she met Jane Wenham, who scolded her for making out she was a witch. According to Anne, Jane threatened her not to tell any more such stories, and the girl hurried home and told the Gardiners what had happened.

It is difficult to know what really happened - Ann became increasingly disturbed and began suffering from (or faking) fits. Finally it was said that she attempted to drown herself.

To the occupants of the Rectory there was only one solution – Jane must be summoned and made to remove the spell she had put on Anne. Unsurprisingly, Jane refused, and locked herself in her cottage.

Sir Henry Chauncy now became involved again. He signed a warrant for the parish constable to arrest Jane.  When she refused to open her door, the constable broke it down, seized her, and took her to the Rectory.

As Jane came into the room, Anne attacked her, scratching her face – as a witch’s blood was meant to act as a cure.  Witnesses reported that even though Jane’s forehead was wounded, no blood flowed – another sign of her guilt.

Next Chauncy ordered Jane to be searched for witch marks. Four women searched Jane’s body for an hour, but couldn’t find anything.

More evidence was heard. Susan Aylott claimed that Jane was responsible for the death of her child. Thomas Adams, junior, of Walkern, said that a month before Christmas she begged him for some turnips as ‘she had had no victuals that day or money to buy any’. He refused to let her have any, and on Christmas morning one of his best sheep died, and he later lost three more. This evidence, used to convict her, really showed the tragic circumstances of a poor old woman.

Sir Henry Chauncy’s son Arthur (an unpleasant character) decided to subject Jane to another witch test – pricking with a pin. He thrust a pin up to its head in Jane’s arm, several times, but no blood came out, just a thin watery serum.

Finally a warrant was issued committing Jane Wenham to Hertford Gaol, to await trial. Her trial took place at Hertford, in March 1712, before Sir John Powell. It is clear where Judge Powell’s sympathies lay.  When one of the witnesses accused Jane of being able to fly, the Judge remarked: ‘there is no law against that!’  In his summing up, Judge Powell invited the Jury to acquit her.

However, they were local men – and clearly as superstitious as her neighbours – and found her guilty.  Powell had no choice but to sentence her to death.  But he ordered a stay of execution pending an appeal.

One of the most disturbing aspects of this case is that some of her key prosecutors were educated men, including three local clergymen – Bragge, Gardiner and Strutt, and Arthur Chauncy, the son of Sir Henry Chauncy a lawyer, best known for his Historical Antiquities of Hertfordshire, (published in 1700).

Francis Bragge, the Vicar of Hitchin, angered at the Judge’s decision not to execute Jane immediately, rushed into print with this pamphlet.

A Full and Impartial Account of the discovery of sorcery and witchcraft, Practis’d by Jane Wenham of Walkerne, in Hertfordshire, upon the bodies of Anne Thorne, Anne Street etc.   The Proceedings against her from her being first apprehended, till she was committed to gaol by Sir Henry Chauncy.   Also her Tryal at the Assizes at Hertford before Mr Justice Powell, where she was found guilty of felony and witchcraft, and receiv’d Sentence of Death for the same, March 4, 1711-12.

Claiming to be ‘A Full and Impartial Account’ – it was anything but. It included a vitriolic attack on Jane’s character – accusing her of idleness, thievery, being a whore and swearing, and concluding: ‘her nearest relations think she deserves to die’.   Bragge’s pamphlet went into five editions – four of them within a month!

This was the start of a pamphlet war. At least nine pamphlets were written about the case – both for and against her.

These two pamphlets represent the case against Witchcraft, in opposition to Francis Bragge, who issued another pamphlet refuting these.

The first set out to demonstrate ‘The Impossibility of Witchcraft, Plainly proving from Scripture and Reason, that there never was a Witch, and that it is both Irrational and Impious to believe there ever was’.

Sir Henry Chauncy was attacked for committing Jane Wenham to gaol.   The second, The Case of the Hertfordshire Witchcraft, was clearly written by a local man as he knew some of the people involved – but his identity remains a mystery.

What happened to Jane?  In Hertfordshire Archives an interesting footnote to the story can be found in the diary of Lady Sarah Cowper, where she records Jane’s death in 1729.

Sarah Cowper’s father was one of those who helped win the appeal to Queen Anne, and obtained a pardon for Jane, after which she lived in a cottage on the Cowper estate at Hertingfordbury. She had no more trouble and was only concerned to have a decent burial and clear her name.

Sarah Cowper agreed to Jane’s plea to have a sermon preached at her funeral which would clear her name, but in the end decided against raising the whole ugly incident again, perhaps because she could not be sure that attitudes had really changed for the better.