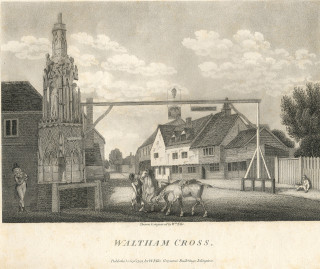 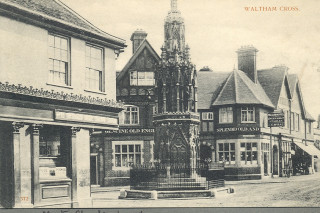 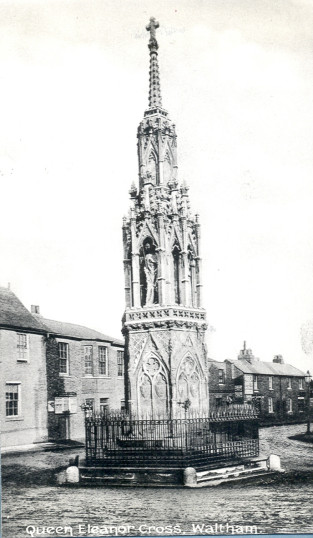 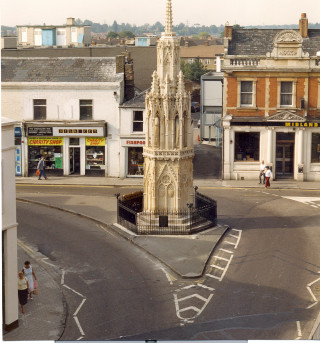 The most famous of the four grade 1 listed buildings in the Borough of Broxbourne stands at the centre of Waltham Cross, at the junction of the High Street and Eleanor Cross Road. It probably gives the town its name, although there’s some indication of an earlier connection with a supposed piece of the True Cross.

The twelve Eleanor Crosses, including the one at Waltham, were erected in memory of Eleanor of Castile, queen of Edward I, who died in 1290. The daughter of Ferdinand III of Castile and his wife Joanna, she was probably about ten years old when she was married to the future King of England, five years her senior. Their marriage, however, seems to have been successful on a personal level. The couple travelled extensively together, and Eleanor even went on crusade with her husband in 1270. She appears to have been well educated, taking an interest in scholarly affairs, but had a reputation as a harsh landlord on her personal estates.

In 1290, Edward and Eleanor went on a hunting trip to Derbyshire and Nottinghamshire, but Eleanor fell ill in September, of a “low fever”, and was cared for at Harby, near Lincoln, where she died on 28th November. Edward appeared to be genuinely grief-stricken, writing “I loved her dearly during her lifetime: I shall not cease to love her now that she is dead.”

Eleanor’s body was taken to the Priory of St Catherine in Lincoln, where it was embalmed; after this, Edward conveyed it in a magnificent funeral cavalcade to London, leaving on 4th December and arriving in London on the 14th. Edward appears to have conceived on the way the idea of erecting a commemorative cross at or near each place the procession stopped for the night. He may have got the idea of this from a similar series of crosses marking the funeral procession of King Louis IX of France, and the intention may have been to provide a focus for people to pray for Eleanor’s soul.

Crosses were erected at Lincoln, Grantham, Stamford, Geddington, Northampton, Stony Stratford, Woburn, Dunstable, St Albans, Waltham, West Cheap in the City of London, and Charing. All but Geddington, Northampton and Waltham have been demolished, many during the Civil War, when many puritans regarded them as both royalist and idolatrous, though Charing Cross was rebuilt (not on its original site) in the 19th century. The popular legend, by the way, that “Charing” is a corruption of “chère reine” (dear queen) is almost certainly false, since the name Charing predates the cross.

The cross at Waltham

On the 13th December, the cavalcade (probably without Edward, who seems to have gone ahead to prepare the reception) travelled from St Albans to Waltham Abbey, spending the night at the abbey before the final stretch to London. The cross, however, was built a mile to the west, on the main road, where it would be seen by more travellers.

Work on the cross began in 1291, with Nicholas Dymenge and Roger Crundale as master masons, and Alexander of Abingdon carving the three statues of Eleanor from Caen stone, and cost at least £95, possibly more. It consists of steps (the present ones being relatively modern) and three stages, the first bearing various coats of arms relevant to Eleanor and the second having three canopies containing the statues, all surmounted by a spire bearing the cross.

Against the odds, the Cross escaped destruction in the Civil War, and again narrowly avoided being removed to Theobalds Park in 1795, although it was partly demolished and then repaired. The monument was badly decayed by that stage, partly by the effects of the heavy traffic passing it, and successive restorations were carried out in the 1830s, the 1880s, the 1950s and the 1980s. During the 1950s work, the statues were removed and replaced by replicas. The originals stood for many years in Cheshunt Public Library (I remember them well as “friends” when I frequented the library as a child) but are now in the Victoria & Albert Museum.

Since the centre of Waltham Cross was pedestrianized, the Eleanor Cross stands , protected by railings, at the centre of a plaza where users of the town centre can sit on benches on fine days, overseen by the benevolent gaze of a 13th century queen.

Waltham Cross has had many brushes with history, from the various famous residents at Theobalds to Anthony Trollope to the magnificent white-water centre for the 2012 Olympics, but its defining legacy is the monument to Eleanor of Castile that stands right at its heart.