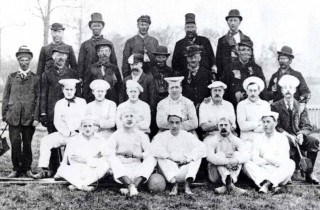 Today, we think of football as being a highly organised and regulated sport, played either by professionals or at least by carefully managed amateur teams. We’re also used to it being played almost constantly — but none of this was always the case.

Football used to be a much more “all-in” game, usually played between neighbouring villages, and matches were often played on special holidays. This has now largely disappeared, but the tradition has either survived or been revived in a few places. Most are out-of-the-way villages, but surprisingly, one place where a traditional football match takes place annually is Waltham Cross.

The Origins of the Match

As far as anyone has been able to tell, the annual Bakers and Sweeps football match in Waltham Cross has its origins in the early 20th century. It may have been as early as 1905, though 1909 is a more accepted starting date. It was originally to raise funds for Cheshunt Cottage Hospital and held on Boxing Day on the Playing Fields at Waltham Cross. The hospital is long gone, but the date and venue haven’t changed over 110 years.

Nevertheless, it has been speculated that it could have been a revival of an older tradition. Traditional football matches of the kind were often played on Boxing Day, and it’s been pointed out that the procession to the ground has some resemblance to a mummers parade. This could, of course, be due to one of the founders being familiar with such folklore, but the possibility can’t be ruled out that, in 1909, there were still people alive in Waltham Cross who remembered such an event in their childhood.

The day starts with a procession of the competitors, one team dressed as bakers and the other as sweeps, to the Playing Fields. An early account describes this:

The respective teams dressed at the Falcon Hotel and marched to the field of battle with brushes (Sweeps) flying; headed by the Temperance Band. The Bakers in their spotless whites, were a distinct contrast to the sweeps, who were indeed a motley crowd, with their tattered and torn garments and dirty shoes….

The match itself is usually described as vaguely resembling football, with multiple balls of various sizes in play. These range from conventional football and rugby balls up to a space hopper, and any can be used to score goals, in as inventive ways as possible.

Nevertheless, even this much normality is only a side-line. The teams carry sacks of flour and soot respectively, which they throw over opposition players, and sometimes spectators (traditionally, the Mayor kicks the match off and gets covered). If anyone commits a foul (though it’s hard to see who can tell, since there are no obvious rules) the offender is put into the stocks set up on the field and has flour and soot dumped over them.

Although the match seems to have been semi-serious in its early years, the “pranks” have now largely taken over. In 1983, for instance, the plan was to have a

smelly loo, Andrew Clayden running amok with an emu, A guillotine to cut off players heads and this to be used as a football (!)…obtain a grocer’s bike to ride the length of the pitch and score a goal.

The match traditionally ends with a tug-of-war between the two teams — the muddier the ground, the better. And no-one bothers to record the score.

As when it began, the Bakers and Sweeps match is all in the name of raising money for charity, but everyone has fun while doing so. Footage from 1962, posted on this site via YouTube, shows highlights from that year’s match.

So, is it an ancient tradition revived or a 20th century invention? In the end, it doesn’t really matter. Traditions don’t have to have existed from time immemorial, and the Bakers and Sweeps football match on Boxing Day is certainly now a firm tradition in Waltham Cross.