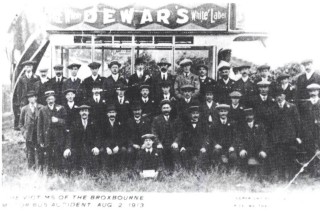 On Saturday 2nd August, 1913, a group of 34 employees from the Park Lane Nurseries set out on their annual outing to Cambridge on a motor bus.

The bus overturned on the way back to Waltham Cross just outside Ware.Three passengers were killed instantly, another two died from their injuries and ten others were seriously injured.

At a coroner’s inquest the bus driver and conductor claimed that the bus was travelling very slowly and had swerved to avoid a cyclist.However, nobody else had seen a cyclist and the bus should not have been able to topple over.Despite the driver’s evidence being disbelieved a verdict of accidental death was returned.

The victims of the crash were buried at Cheshunt cemetery and the vicar of Cheshunt caused outrage by suggesting that the crash had been God’s punishment against the people of Waltham Cross for their excessive drinking, swearing, blaspheming and dishonesty.