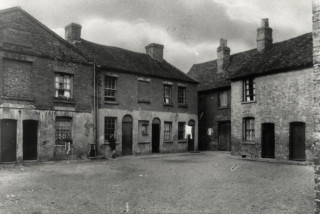 Chapel Yard just before it was demolished in the mid 1930s. The Bread Bin now stands on the site.
Hertfordshire Archives and Local Studies 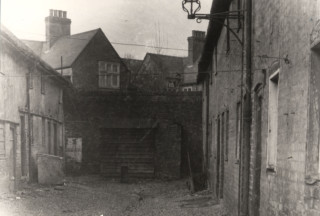 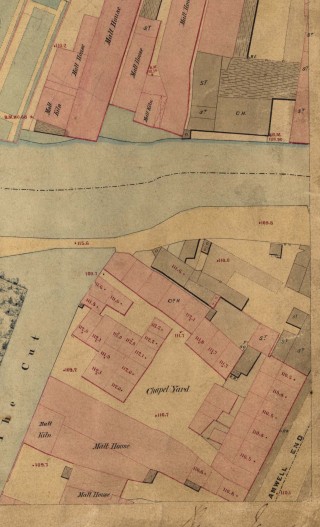 Chapel Yard on a map of 1851
Hertfordshire Archives & Local Studies 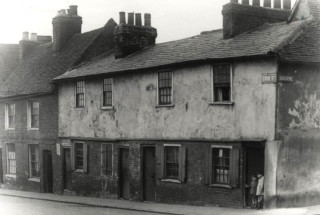 The top of Crib Street and The Bourne in 1936 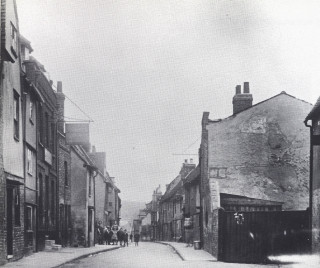 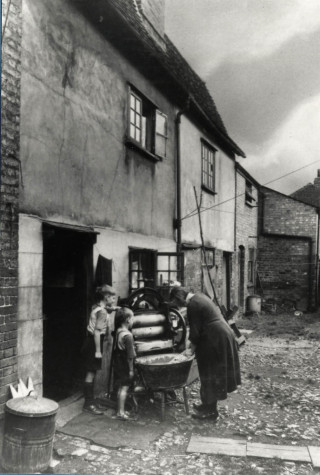 Ware Local Board of Health was set up in 1849 after a damning health report.  Ware was considered an exceptionally bad area and in the mortality stakes was compared to places in industrial Lancashire, the unhealthiest county in the UK.  1 in 7 babies died within 12 months and over 35% before their fifth birthday.  The report referred to typhus fever, cholera and diahorrea.

In 1832, half of the cholera cases occurred in Kibes Lane with some in Dead Street (now Church Street). Other places included Adams Yard, Caroline Court (off Baldock Street), Bluecoat Yard, Star Street and Amwell End.  In the Ware burial register of 1849 there are detailed notes about some of the victims of cholera who lived in these yards and eyewitness accounts of their last agonising hours.   For centuries, most of the labouring classes lived in the crowded yards of Amwell End and the 1881 census showed over 1000 people resident in just 6 yards.  The worst of these was Chapel Yard which was by the river.  In 1849, Mr Moore, a clerk to Ware Union advised the Board to “cleanse a particular house in Chapel Yard where more typhoid fever had prevailed than in any other part of the yard.  Two dirty families hoarded together in it to the prejudice of public health.”

Caroline Court was a notorious yard and was demolished in 1933. It was described as “badly arranged and congested”.  There were 25 houses with 100 people and no privy of any kind.  Offal of every description was thrown into two open cesspools and the overflow ran into the main street.   Even worse was Adams Court.  In 1889, the health inspector wrote:  “Again I have been called to Adams Court.  It is without exception the most disgraceful of any in Ware”.  It was dirty and dilapidated and was ordered to be demolished in 1894 for being dangerous and injurious to health.    For years, sewerage was allowed to accumulate in open ditches and the stench was foul, especially in hot weather.  In 1850 tenants without a toilet had to go in ditches and fields after dark.

Crib Street had one of the few drains in the town but they were mainly a means of moving a nuisance from one place to another.  Owners were ordered to construct proper drains and privies, empty cesspools or face a fine. In 1857, the Red Cow drains were out of order, refuse soaked into the cellar and the yard behind the pub was overcrowded.  The roof leaked, it was damp and the windows were broken.  In the 1890s the yard was still a nuisance and was finally declared unfit for human habitation.

Kibes Lane was very crowded and narrow.  In 1849 hundreds of people were living in about 30 houses.  They were described as miserable habitations with no-where to dispose of refuse and that a ditch at the end of the street was 2ft thick with excreta.  By the 1900s there had been some improvements but life was still tough.  It had a dubious reputation and it’s said that policemen patrolled in pairs.  The council paid off the owners and in 1934 the houses were demolished. The inhabitants were re-housed in a new estate on Musley Common and the site has remained a car park ever since.