You are here: Home>Herts history>Topics>World War One>The experiences of a cavalryman and his sweetheart during the First World War 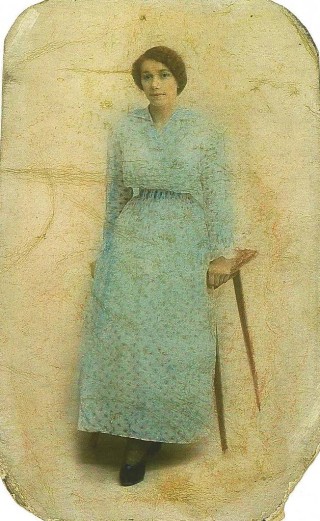 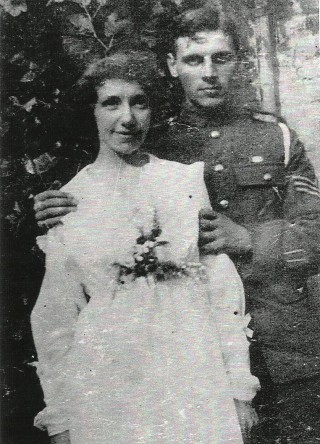 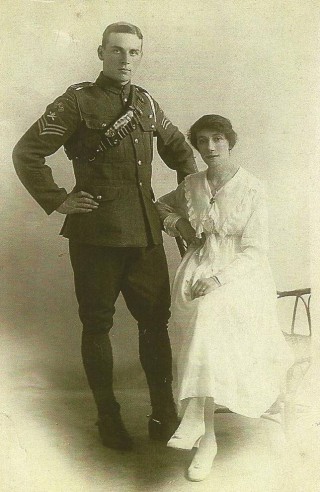 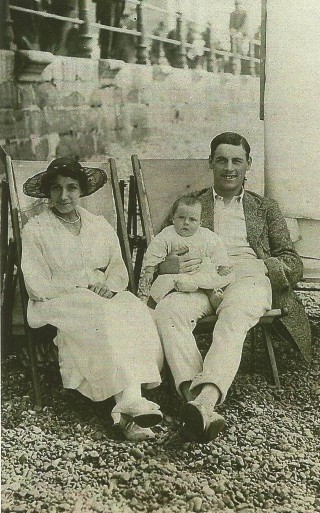 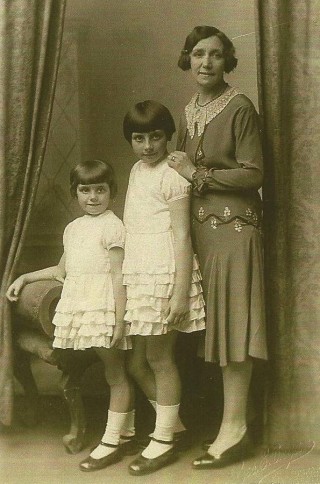 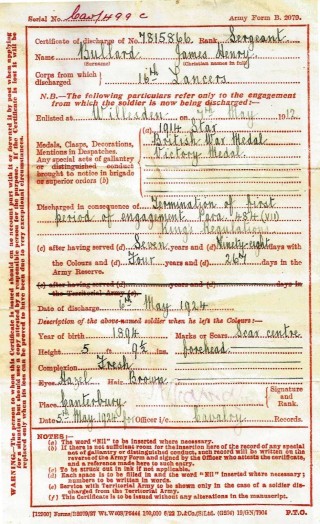 It was my great privilege, recently, to be handed a package of papers relating to a man and a woman who were ultimately to become the grandparents of a Mrs. Jillian Reeves, in turn a mother and grandmother, living in Ware and a long-term resident of the County.

The papers comprise several photgraphs, one of which is of a young girl of 21, bearing on the reverse the message “With fondest love and kisses from your affectionate sweetheart, Mabs”. The photo is touchingly ‘dog eared’, no doubt due to its being carried into action many times in the breast pocket of her beau’s uniform. Another item is a Discharge Certificate indicating that the young soldier was with the 16th Lancers, having enlisted over two years before the outbreak of war and being formally discharged some 12 years later.

The greatest treasure, however, is a account of the memories of Mabel Griffin, born on 7th Februyary 1895, who subsequently became Mrs. Mabel Bullard, as it contains gems of information regarding life in those days,and was thankfully taken down and recorded by a nephew.

We take up the story of Jillian Reeves’ grandmother around the time of the outbreak of the Great War, when a young Mabel Griffin, aged 19, following completion of her apprenticeship in dressmaking  at Derry and Toms in Kensington, was working in the “blouse room” at Debenham and Freebody in Oxford Street.

Her call-up soon came, and the choice was either into uniform or munitions. She would have preferred to go into uniform but, as four of her brothers were already on active service, family pressure made her choose the latter and Mabel’s first role was making bell tents for the army. The work was hard and one full day’s work produced just one tent, for which she was paid 4/9d (24 pence approximately). Industrial action at the works provided an opportunity for change and Mabel found herself producing fuses for 13lb shells. This new position, although requiring long hours, provided Mabel with camaraderie and friends and she was never happier.

Turning now to James Henry Ballard, very little earlier history is available, except to know that he was born in 1894 and had served as a professional soldier in the 16th Lancers since 1912.

Mabel and ‘Harry’ were destined to meet and the occasion was a dance at the local church hall. Harry was on leave, having earlier been wounded in the head (Note: The Army dicharge certicate issued several years later makes mention of his “scar centre forhead”) and a friend introduced them..In her written account, Mabel said that he “saluted us both. He was very good looking and smart” In response to the invitation from her friend “Harry, why not join us and come to the dance ?” he protested that he could not dance, but this objection was overcome and a happy evening together ensued. Further ‘dates’ came about and a happy relationship gradually developed between Mabel and Harry.

Harry obtained a further leave from France which was spent “all the time together, and he bought me a sweet dress ring for a parting present” after which correspondence was kept up for a futher four years. It was during this time that Harry suffered, in action, from the terrible effects of a mustard gas attack when, it would seem, the only protection he could get was from “burying himself in the dirt as far as he could, face down. So he was burnt all down his back and was in hospital for 11 months”.

Despite this horrible experience he recovered, was discharged as fit, and obtained further leave. During this period of leave Mabel and Harry were married – on 11th August 1918. By this time Harry had become a sergeant and his regimental comrades formed a guard of honour at the church, providing an archway of drawn sabres as the couple emerged after the ceremony. “Harry looked so smart in his new uniform and jingling spurs”.

Six weeks later Harry found himself in France again, taking part in what must have been one of the last engagements of the Great War – on Armistice Day. It transpired that, unfortunately, this prejudiced any claim which he might subsequently make for an army pension as he was judged completely fit having once again returned to the battle line.

Clearly Harry’s wartime experiences, particularly the gas attack, had a lasting and unsettling effect upon him and his personality as, after reluctantly agreeing to quit the army he became unable to settle down and sought solace in drink and company outside the marriage. After14 years of marriage came the final parting, by which time the family included two young daughters.

Mabel, apart from receiving a modest remittance for the daughters, never knew anything of Harry’s whereabouts, only learning in 1976 that he had died. Despite hardships, Mabel’s closing remarks in her written account still reflected feelings for Harry. “I still loved him, for we had good and happy times when he was in the army, and he was a very brave soldier – never feared to go back to the battlefield. He suffered so in the war and it left him a wreck”.

As Mabel’s written account contains such a wealth of precious and interesting detail of those days, Jillian Reeves has very kindly given permission for its attachment as a PDF so that anybody wishing to access this information can do so.