Wareside. The Retreat and unknown 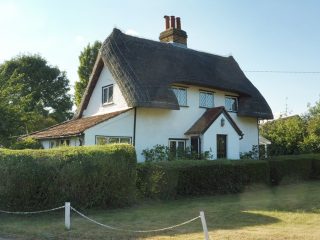 Edward Dewbury wrote a report on the Wareside almshouses in 1922.

The Retreat does not seem to be in an ideal place for aged poor women. The site may have a lovely view, but it’s at the top of a hill with a narrow road access. It does make you wonder how they managed to get to the village and back, especially in bad weather or as age would make walking difficult.

Historic England cites it as an 18th century building, in existence by 1788 as a feoffement dates from that year. Victoria County History adds that the widows received parochial relief, while Jane Webb notes they were built by an unknown donor. The almshouses occupied 19 poles. According to the 1845 tithe award, the occupiers were Eliza Izzard, Sarah Hurt & others, while the Ware Charity Trust was the owner.

The Historic England entry says it is thatched, but photos exist to show it was tiled at some time. There is a photograph claiming to be of the building in its thatched condition in a copy of Hertfordshire Countryside. It was grade II listed in 1983, reference 1341428. Historic England also has an archive volume of information, which had not been fully catalogued at the time of writing.

Judging by recent estate agents’ reports it is now a very desirable property, worth about twice the average of properties in the vicinity.

DE/WE/3/1 is the copy of schemes of Ware Charity Estates; DE/WE/3/2 are the original documents.
They include the 1909 and 1923 Charity Commission orders.

Historic England (accessed Mar 2021)
https://historicengland.org.uk/listing/the-list/results/?searchType=NHLE+Simple&search=1341428
An archive report also exists, but not fully catalogued at the time of writing