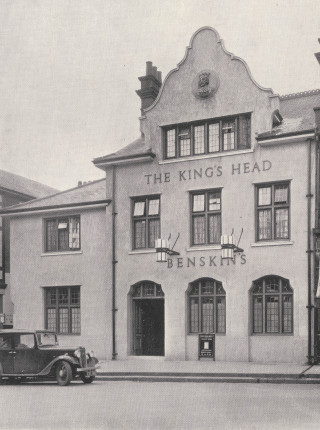 In the early 50s and in my twenties, I was employed as a Maltster in a two man Maltings situated in Three Tuns yard, this was just across the road from where the Watford Museum now stands. The reason for my writing this is that because of my young age at the time, I must be the last of the Maltsters alive that worked for Benskins.

There were just two men in our Malthouse; there was a larger Maltings however which was situated at the riverside down by the Colne, this had six men, but worked on the same practice as our smaller Maltings. There was also what was called an automatic Malthouse in which the growing grain was turned in large drums by electricity and not by hand, as was the case in the other two Maltings.

The Malting started when Barley was put into a large Brick built vessel called a steep, then soaked by a revolving arm called a “Sparge,” after two days it was drained overnight and then shovelled out to stay in a heap until heat was generated, and then it was spread out on the floor to start growing. When on the floor each load became a ‘piece’ and was twenty sacks of barley at two hundredweights per sack.The rate of growth was controlled by the action of turning to maintain steady growth, the grains looked like spiders with their roots getting longer and longer, while this was going on another piece was steeped at the other end of the Maltings to provide Continuity with a new “piece” every two days In the final days of growing, which was controlled just by the thickness of the Grain on the floor and by ploughing with an implement with steel blades which was pulled through the grain to aerate it as needed.

The other method was to turn each “Piece” as each load was called, with a wooden fork, this was used to literally throw the grain into the air and so cool it down, sometimes if the weather was cool the piece stayed fairly thick all of the time. If the grain was not level then it would grow unevenly, my work was never right for my mate who had been doing the job for donkeys years, although it was some forty odd years ago I can still make a piece of digging dead level, so I must have got it right eventually.   There were six pieces on the go at one time, the floors were arranged to be each side of a central Kiln, this is where the grain was eventually going to end up, there was a hoist worked by pulling on a rope to engage a clutch, it was loaded by a large basket on wheels called a skip or skep. These were repaired by a Basket makers in Chapman’s yard, which was opposite Benskins main gates, which had Weston’s fish and chip shop on one side and a small post office on the other.

A temperature of 160 degrees

The kiln was on two floors with the spare heat from the lower kiln floor used to get the grains partially dry before being loaded onto the lower floor by means of traps, these were just like Manholes. The whole object of the Malthouse was to keep a continuous supply of malt for the Brewery. The temperature when unloading the kiln could be as high as 160f, the shovels had to be wood to prevent damage to the grain, also they would have given a nasty burn if they had been metal, the top kiln was the least easy to handle because of the steam, just like being in a bad fog, this came from top kiln to bottom kiln every two days The floors of the kiln were like a heavy metal gauze or netting that was narrow enough to stop the grains from falling through, although the roots would fall off the grains to end up beneath the kiln floor, the heat coming up was enough to curl the eyebrows at times! Every so often we would have to enter the chamber beneath the lower kiln floor to shovel out the roots and dust from the kiln above, then we were right on top of the fire, and the dust raised by our efforts made it a feel your way job. On our feet we wore rope- soled shoes like sailors, I think it was to stop us crushing the grain, I wonder if our wooden tools are in a museum somewhere?   The fuel used was best Welsh anthracite, this came by Rail into Benskins yard from the Watford Junction station by way of the line through Watford High street station and off a loop to the yard of Benskins and was unloaded into a lorry and delivered to the Malthouse, the barley came from Norfolk and Essex, each sack weighed two hundred weight as Barley, but only one and a half hundredweight as Malt.

We worked from 5– 30 am until finished with a breakfast break at 8—30am, the season only lasted until the weather got too hot, so the season was nine months, in the summer we were employed in the Brewery or wherever needed, which was only five days, the Malting season being seven days a week. Usually we were the first to enter the yard and the Heavy horses would, kick the door or the floor as we got near to their stables, which were near to our place of work, the horses were shires, which were used to deliver beer in the town and to appear in the local Shows, especially the Watford carnival.

The Malthouse fires were obviously alight for the whole of the nine months that we worked, this needed visits during the evening to stoke the fire, or turn a “piece” if it was getting too hot, or to drain a steep ready to shovel the grain out the morning after. If a piece had cooled too much it had to be thickened no matter what time of day so that it did not die, winter was hard going sometimes. We carried on through Christmas and Easter, On Christmas day we had done a days work before most people were up! Once started the process carried on, the Malting floors were unheated, the only thing that we could do was to close the shutters if it got cold—– in very warm weather the grain needed constant attention, So sometimes an evening visit turned into a long exercise, with a lot of work. After Malting the centre of each grain turns to a crystal like structure, this is the Malt, it gives Beer its strength, there are various colours, which are required by the brewery for different beers, this is produced in the length of time the grain is fired, and of course the temperature.

In one of the other Maltings By the river Colne some of the grain used to be burnt in a large drum like a massive coffee roaster, this was for making Stout, a Guinness like beer, The word caramelised was used but it looked and smelt burnt to me! When Malted the grain was put into large bins until required, then we would put it into sacks with a bushel skip, four to a sack, we would then load it onto a flat trailer for collection by the “Scammel mechanical horse” a three wheeled tractor.

Because of the heat involved we got a ration of beer called “beaver” our ration was a half gallon each, or four pints a day, as I did not drink there was a certain attraction to come and visit the Malthouse to see Charlie and John—— especially John!We were friends to a lot of the Watford police constables, who just had to check to see that we were in no danger, wasn’t that nice of them? Can you imagine the scene, are you all right? ——– well all right——- if you insist!

Charlie Medlar was a Maltster from Norfolk, he transferred to Watford from Mitchell’s and Butler of Norwich, I think—–having no background in the Malting business I drove him mad! But we survived together for a few years until I moved on, he certainly was a funny bloke people used to come just to hear him say —–Blast my heart!   All this work made one pretty fit, in today’s workout society we would not need to visit the Gym, after all we each moved several tons of grain a day, we were called the fresh air fiends because of our open necked shirts even in winter! We had several cats which as you can imagine were encouraged to make a home, in one of the bins for storing Malt seemed to be their favourite place, there was never a problem with vermin so they were doing their job satisfactorily.

Also in the same yard were the maintenance sections of Carpenters and Bricklayers, the pub signs were repaired there also, some of which were very well painted, by Millers the Sign writers in King street, after repair and undercoating. The company cars were Garaged across from the Maltings, the M.D. of Benskins a Mr Kilkenny, had a lovely Armstrong Siddely and a Humber Super Snipe, while next door was the tack—room with all the very large collars for the shires and the associated leather and brass work. This had hundreds of Rosettes around the walls, the Horses must have won most of them I suppose, there was every colour that you could imagine, the Horsemen seemed to have acres of leather to clean, not to mention the brass, or were they grooms?

So there was our Yard, with the Three Tuns public house on one side, on the other was a shop for what I can only call high-class second hand clothing, the owner was called Wiltshire I believe. We got our newspapers from the shop of Reg French, just a step or two from our place of work., next to the second -hand clothing shop.

When I left Benskins they owned 1100 Pubs and clubs, they also owned nearly every corner property in the town that was vacant, they also produced one of the strongest ales brewed in the British Isles, I refer of course to Colne spring ale. Alas it’s all gone along with our printing, I never thought that I would see the demise of two such flourishing industries in my lifetime.