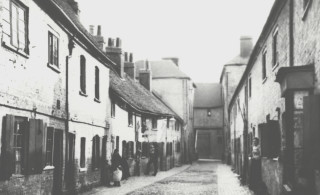 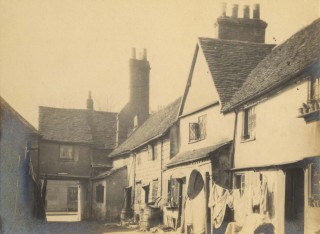 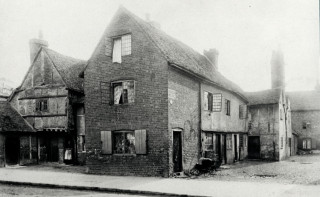 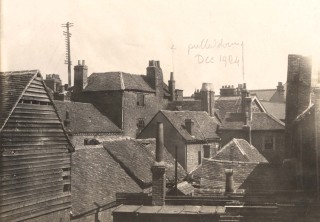 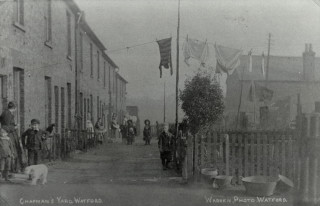 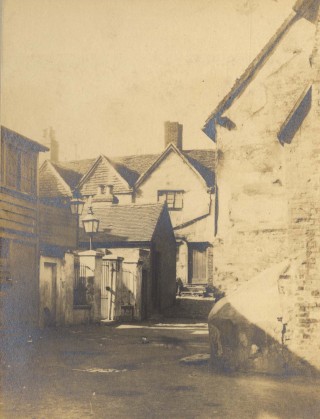 Watford was once a town with one long street and has changed continuously since the Second World War.  From this street were many yards and alleys where the majority lived in appalling conditions.  With the building of the railway in 1837 its population steadily increased and by the 1840s sanitary conditions had rapidly deteriorated leaving the primitive drainage system unable to cope.

In 1849 George Clark inspected Watford after a petition by certain residents to solve the problems of sanitation and lack of decent water supply.  The Board of Health was elected in 1850 after the town was recovering from a severe bout of cholera.  When Charlotte Tomlin died of the disease in 1849, Dr Thomas Ward reported the matter to the Board of Guardians and described the vicinity as “disgustingly offensive”.

The conditions were not just restricted to the yards and alleys.  Even the High Street had “the most offensive effluvia”.   The unhealthiest areas were described as BallardsBuildings, Meeting-House Alley, Swan-Alley, Farthing Lane, Red Lion Yard, Chequers Yard and Old Yard. There was animal matter floating in open drains, pigsties, open cesspools, slaughter-houses and slops from houses all being thrown onto the pavement.

Ballards Buildings was described by Clark as “one of the unhealthiest localities in which few dwellings escaped disease.” Not just a building, it was a narrow passage between houses with sheds and animals on the other side. They were in a bad state by the 1920s and were ordered to be demolished.  At a public enquiry meeting by the Ministry of Health, the room was full of tenants who made audible interruptions.  Many had lived there for years and maintained their homes the best they could and resisted the order to move.  They resented the implication that they were the cause of the “slum” in which they lived.  But it was too late and the 55 houses came down in December 1924.

The cottages in Hedges Yard were described as the worst dwellings in town: three boarded hovels, two of which had only one room, roofs open to the elements and floors below the level of the un-drained ground.  Red Lion Yard had over 30 houses and Bridge Place (formerly Old Yard) had an open cesspool.  There were 62 people in 15 cottages and the rents got cheaper with proximity to the cesspool.  Water was chiefly supplied from wells and worked with buckets.  Due to poor access to water, personal cleanliness was a problem and residents washed in the river or in a dirty pond.  Rain water could be stored for 3 weeks in a cottage but when it ran out it was bought from a neighbour or fetched from the river.

George Clark’s report recommended a proper water supply and drainage, removal and filling up of all cesspools and proper paving.  Many years later in the 1930s a proposed slum clearance involved 157 families and 993 people.  New Road, Chapmans Yard, Red Lion Yard, Albert Street, Wells Yard, Beechen Grove and The Rookery were cleared in 1934.