You are here: Home>Herts history>Topics>Transport>Railways>Watton at Stone hit by a 'Tornado'

Watton at Stone hit by a 'Tornado' 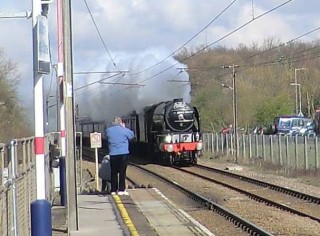 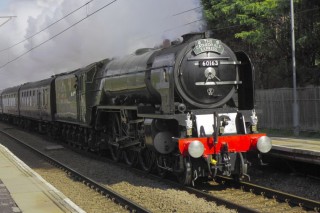 The village station of Watton at Stone has a quiet existance, experiencing little beyond the flow of commuters up to Town in the morning and back from Town in the evening. This is punctuated, very occasionally, by the odd goods train and express passenger trains using the ‘Hertford Loop’ when there are major works being undertaken on the main line at weekends.

A few weeks ago, as like as not encouraged by their wives, those who had been train spotters back in the fifties and sixties began emailing friends and acquaintances with the message “Tornado is coming to the Hertford Loop on the morning of Wednesday 4th April”.

This produced an immediate response, with grandfathers enquiring from far away where might be the best vantage point for them and their grandchildren. Many, of course, plumped for the ‘down’ platform at Watton at Stone – best for pictures.

What was the object of such frenzied interest? Not even a vintage steam locomotive – this one was built only a few years ago.

Back in 1948/49, to cater for the demands of a railway system worn out by World War 2, a special class of locomotive was designed for fast East Coast traffic on L.N.E.R.with the ability to run on low grade coal and requiring as little maintenace as possible. This was the A1 class designed by Arthur Peppercorn and numbered some 49 locomotives. Despite being very popular, all were unfortunately sent for scrapping by 1966 in the wake of rapid ‘dieselisation’ and, not being sent to the loco-friendly scrapyard at Barry Island as many surviving veterans were, none of this class survived.

End of story….until a group of enthusiasts came together to raise funds and build a new A1 Pacific from the original drawings. What miracle arose from the dreams of these enthusiasts is now seen bringing pleasure to young and old all over the Country drawing excursion trains to venues everywhere.

On this occasion the, sell out, excursion was from Peterborough to Salisbury, picking up at Hertford North.

At 10.20 am Tornado bore down on Watton station at high speed, hardly giving the many spectators an opportunity to take more than one photograph…….but it was worth it.