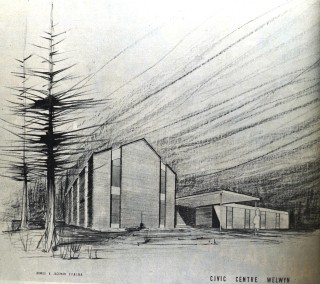 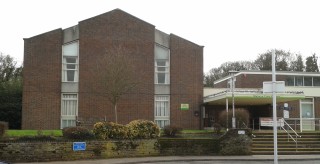 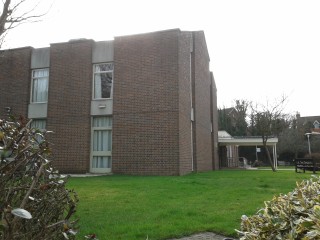 This picture appeared in the Welwyn Times and Hatfield Herald on 12 February 1965, page 4 with the following article:

“Prepared especially for the”Times-Herald”, this architects impressin of Welwyn’s new Civic Centre under construction at Prospect Place shows how the building will appear when completed in about a years time.

On the left is the auditorium, measuring 70ft. by 44ft. with accommodation for 360 people, and the County Council Library is on the right. The canopy over the main entrance shelters a pram park for mothers visiting the health centre. Room for five cars has been provided, with space for a further 30 at the rear of the building.

The centre will be finished in Staffordshire bricks, which RDC surveyor Mr. P.B. Hawley describes as “ranging in colour from a deep purple through to shades of red with flecks of gold.

Mr. Hawley added that work is proceeding well on the site and the £84,000 centre is expected to be complete next December with possible opening in January.”