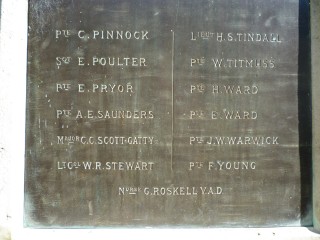 At the beginning of the year the  postal service was an important agenda item for the Welwyn Parish Council.  The  minutes (HALS CP106/1/2) of its meeting on 17 January 1916 recorded that a resolution be forwarded to the General Post Office, London, that “the Welwyn Parish Council are unanimously of opinion that the discontinuance of the Evening Delivery of letters constitutes a very great inconvenience to business men and that it would be more convenient if a delivery can be substituted so that the afternoon letters be delivered later with the Evening arrivals“.

The meeting held on 20 March 1916 noted a letter from GPO rejecting Council’s proposal.

The Rural District Council (HALS RDC14) met on 9 February 1916 and discussed a letter from the Local Government Board (LGB) on the Military Service Act 1916 stating that it would be necessary to form a Tribunal for the district.  A further letter from the LGB was noted at their 26 April 1916 meeting.  This allowed for any person, authorised by the Local Registration Authority or by the Chief Constable or Police Constable, to visit any house and require production of Certificates of Registration of all male members living in the house who are or ought to have been registered under the National Registration Act 1916.  It was resolved, in view of the small area of the district, that no immediate action was necessary.

Conscription of single men between the age of 18 and 41 was introduced by the Military Service Act in March 1916, and was extended to married men in May.  Welwyn Parish Council, at its meeting on 8 June 1916, discussed the position of the Fire Brigade.  It was agreed that a letter be written on behalf of Messrs W J Adams, G Adams, C Penn and A Reynolds supporting their appeals and also to point out that the Brigade was reduced to six members including the captain and that the Brigade was reduced by half its strength as other members were already serving with His Majesty’s forces.

The Hertfordshire Mercury reported in July 1915 that, through the kindness of Lady Scott-Gatty, the children attending the Parish Church Sunday School had been entertained at tea at Wendover Lodge  and a splendid meal was provided for them.[1]

A year later, tragedy hit the family. The Times paid tribute to Major Charles Scott-Gatty, the second son of Sir Alfred and Lady Scott-Gatty.[2]  Although he had been active in recruiting and training for the Hertfordshire Regiment, his health broke down and he did not recover.  The funeral was to be held at Welwyn on 27 July 1916.

An appeal was made for eggs for the wounded.  In July 1916 the Hertfordshire Mercury reported the success of the women of Welwyn involved in egg collection, thanked Miss Wilshere for making Becket Hall available as a depot and noted that 330 eggs had been collected in June and a further 360 at the church on 4 June.

The Hertfordshire Mercury  reported on the Petty Sessions at Welwyn at the end of the year which dealt with a number of cases of breaches of the Lighting Regulations.  Mr Alfred Tindall of High Welwyn was one of those summoned.  P.C. Darton   told the bench that he could see a bright light shining from the defendant’s house from half a mile away.  Mr Tindall had already been warned by witnesses and special constables but his defence was that he had dark coloured blinds but they did not meet at the bottom. He was fined 10 shillings.  Mrs Laura Samms of Codicote was also fined 10 shillings.  P.C. Day said that she had blinds and curtains but there was a lamp alight and the door was open.  The paper recorded that “When witness drew attention to the matter she shut the door in his face“.

Further information on Welwyn in World War 1 can be found on the Welwyn Local History web-site http://www.welwynww1.co.uk/

[2] The Times Digital Archive is part of the Online Reference Library available to Hertfordshire Library members.