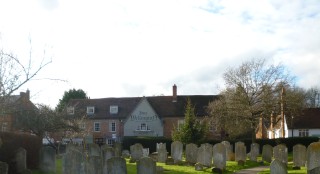 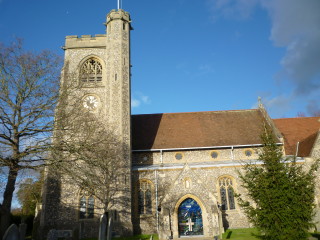 The Times for 12 January 2015 reported that Britain was braced for more strong winds and flooding.  Similar weather was recorded by the Hertfordshire Mercury in January 1915 with the news that gales had brought down a tree in Tewin Water Park and 3 sentry boxes on the viaduct, one being pulled clear just as a train approached.

The year had started with what the Hertfordshire Mercury described as a “most pleasing concert” held at St Mary’s hall, the building packed “with a most enthusiastic audience” and it “proved to be one of the most entertaining and amusing that had taken place here for a long time”.

A casualty of war was the Sunday School tea and prize-giving which took place on 27th January. The Hertfordshire Mercury reported that owing to the war there was no entertainment, but the children were doubtless glad to take their share in the general postponement of civilian pleasure making. (Were they?).

Domestic matters continued to occupy the members of the Welwyn Parish Council. (HALS CP 106/1/2). In March a complaint was made to the Gas Company as to the state of the Street Lamps and the number of broken mantles. The Clerk was instructed to get particulars from the Gas Company or from the Police about the broken lamp at the “Wellington“, caused by a motor lorry, and to make a claim for the damages from the owner of the motor. Later in the year (July) the Council agreed to an increase of 1/6d per lamp for one year, to be paid to the Welwyn and District Gas Company, owing to the increased cost of coal etc.  This was rescinded in October as following the new Lighting Order the Parish Council resolved that there should be no street lighting at all. By the end of the month all the windows of the Parish church had been supplied with thick blinds to prevent the light being seen. Only the clorestory* windows were left to show that service is going on, “the churchwardens having been informed that these may safely be allowed”.

Another cause for concern was the state of the allotment fences at Woolmer Green.  These were noted as being in bad condition in January and later in the year the Clerk was asked to obtain tenders for repairs.  Mr Lawrence produced the cheapest quote (£10.5s.0d.)which was accepted in August.  The Parish meeting held on 6 December noted that the fences had still not been repaired.

Allotments were being tended, whatever the state of the fences.  In September, the Hertfordshire Mercury reported that Mr J Hockett of Welwyn Station cottage, had dug up a Dalhousie potato on his allotment on the railway bank “weighing 2 ½  pounds bumping weight, the largest potato ever grown on these allotments”.

External matters would seem to be of less importance. The June 1915 Parish meeting recorded that a suggested Lantern Lecture in the Hall on the Wednesday evening before the Recruiting meeting, promoting the Herts Territorial Force Association, was deemed inadvisable as the Hall was taken and the Clerk was instructed to suggest that some large village not included in the route march should be visited.

However, by the end of the year, the impact of war was being felt. The November 1915 meeting of the RDC noted that the Hertfordshire War Agricultural Committee had been formed and that the Council were asked to form a War Agricultural Sub Committee and also a Local Tribunal to deal with claims that employees were indispensable.

The High Welwyn Waterworks premises were to be insured against aircraft and fire and the ladder at the Water Tower was to be closed “in order to prevent children climbing the same”.

More information on Welwyn in WW1 can be found on the Welwyn LHS site http://www.welwynww1.co.uk/updates.html:

*  The Pictorial Guide to Hertfordshire defines clorestory as windows over the nave, above aisle roofs.