A film shot in Welwyn Garden City and Letchworth 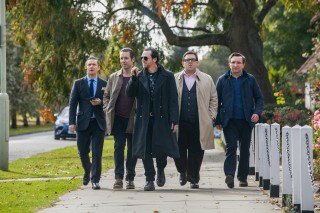 The film stars Simon Pegg, Nick Frost, Rosamund Pike, Martin Freeman, Eddie Marsan and Paddy Considine as a group of friends who attempt to recreate a marathon twelve-stop pub crawl from their youth, which they call “The Golden Mile”. This starts at the (fictional) The First Post and ends at The World’s End.

The Peartree pub in Welwyn Garden City was used as The First Post, and also for interior shots for two other pubs. Sequences of the film were also shot in WGC town centre – in Howardsgate and around the John Lewis car park, near Debenhams.

Here’s the complete list of pubs – the fictional name followed by the actual location in WGC or Letchworth:-

* The Mermaid (The Broadway Cinema, Letchworth)

* The Hole in the Wall (Letchworth Railway Station)