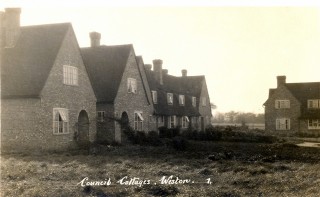 East side of the Square
T B Latchmore 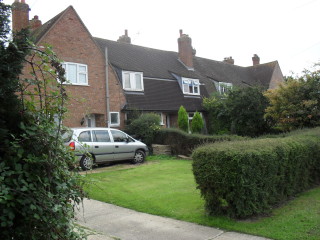 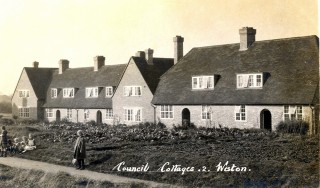 West side of the Square
T B Latchmore 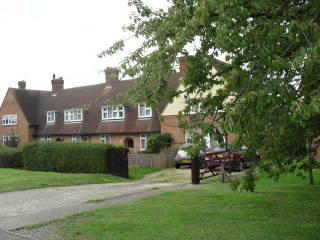 Then and now photographs of the Council Cottages in Weston. The black and white photographs (found in the Local Studies Library at County Hall) look to have been taken in the 1930s. The houses were built in 1924. (Click on the thumbnails to view the full size photos and browse through the gallery.)

The street with no name

These houses were built in the aftermath of WWI, as were many council houses, in response to the outcry against housing conditions experienced by men returning from the fighting. The area had not yet been given a street name at that time (it is now Friars Road).

In the first picture, a gap in the houses shows open fields.  This area was built on in the 1960s.

It is interesting to see that there were then no paths to the front doors and no hedges or trees planted.  Also missing are telegraph poles – no telephones in these houses at the time. To begin with the houses were not wired for electricity either (the residents later signed a petition asking for this). Neither did they have indoor bathrooms, but privies in the gardens. The green area in front of the houses (the Square) is now used for car parking.

I have tried to echo the angles of the original photos, but there are now trees obscuring the original views.