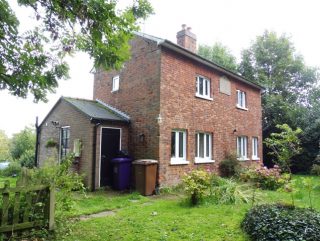 Roe's almshouse at Weston. The dedication stone is between the two upper windows. Sep 2017
Colin Wilson 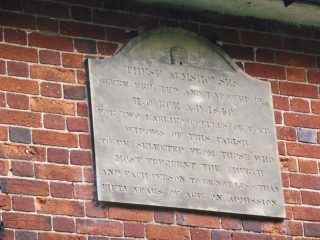 This almshouse at Weston was the last of three erected by Henricus Octavus Roe, a maltster. His will notes that he lived in Weston. The other two almshouses were at Stotfold in 1835 and Baldock in 1838. Roe himself died in 1854 at the good age of 93, hence his almshouses were built when he was between 74 and 79 years old. His death notice is contained in the County Chronicle.

It was erected in 1840, at the beginning of Queen Victoria’s reign. The endowment stone records they were for two married couples or four widows. The criteria were those most frequent at church and had to be over 50 years old.

Vyse says that they are semi-detached dwellings in an isolated setting on the periphery of the village. Indeed it is a bit isolated at the end of a narrow lane, but it’s not too far from the village and less than 400 yards from the church along the public footpath.

Victoria County History cites the building date as 1841, and calls them Church Almshouses. It adds that the endowment consisted of £519 15s. 7d. consols, which produced £12 19s. 8d. a year. Roe’s will states that his property had to be converted to cash and distributed among a number of named charities and people.

Cussans, writing in 1871, makes no mention of these almshouses but does mention the one at Baldock.

The building is now privately owned, and thanks are due to the residents for permission to take the photographs.