Charter of Edward the Confessor

granting 10 hides in Wheathampstead to the Convent of Westminster, 1060 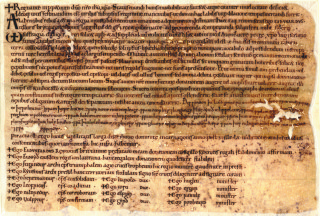 The document was originally found in one of the scrapbooks from the Rothamsted collection, and was taken out and conserved with fine silk gauze.
Hertfordshire archives and local studies

In this document, which is the oldest one held at Hertfordshire Archives, the Saxon King Edward the Confessor grants land in Wheathampstead to the convent at Westminster. The building of Westminster Abbey, which started in 1050, was funded by many such endowments, or donations, of land.  Edward, who reigned between 1042 and 1066, was a very holy man and this gift was probably one of his attempts ‘to reach out to the kingdom of eternity’. The abbey was built between 1050 and 1065, a symbol of a national government for the first time ruling all of Britain.

The language changes from Latin, which was the official language for the legal matters, at the beginning of the document, to Anglo Saxon, the day-to-day language for the description of land boundaries. The witnesses at the bottom include Earl Harold, ‘Ego Harold dux’, who was King of England from 6 January 1066 until 14 October 1066, when he was killed at the Battle of Hastings by William the conqueror’s army.

To emphasise his victory William was the first monarch to be crowned King in Westminster Abbey, on Christmas Day 1066, and every Monarch has been crowned there ever since.