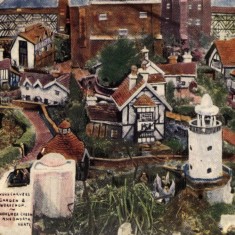 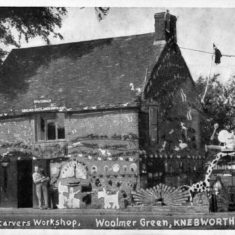 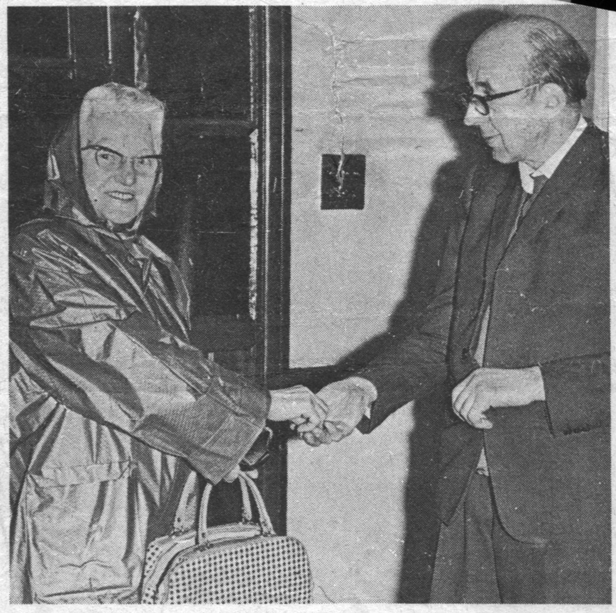 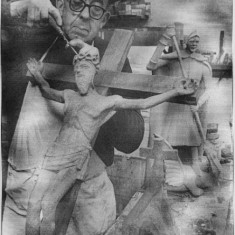 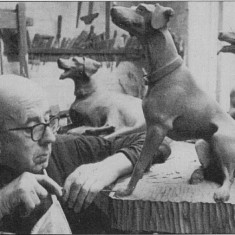 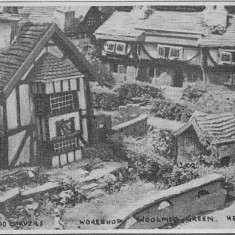 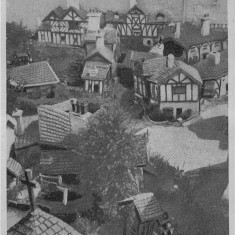 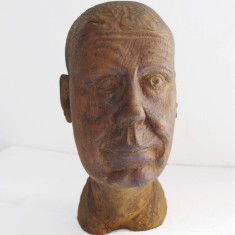 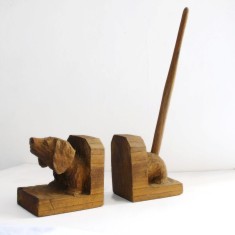 Carved book ends in the shape of a dachshund
Emma Pearce 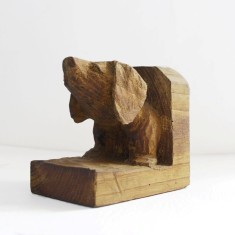 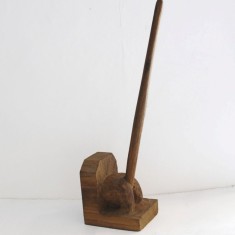 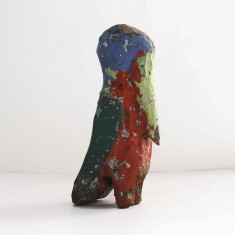 Small bird carved for Richard Geoffreys. As a young boy resident in the village he was given sweets and this carving by the woodecarver as a reward for doing well at school and learning to put on his gas mask correctly.
Emma Pearce

Harry Macdonald was brought up in Harewood near Leeds. After his father’s death in 1937 he moved down to Hertfordshire and set up his woodcarving business in a barn at the junction of New Road and the Great North Road in Woolmer Green. Initially he produced rustic garden furniture but business was rather sporadic.

To attract new business Harry carved the giant figure of a policeman who stood holding up a hand to the passing traffic, encouraging passers by to stop and look at his business. This initial carving led to many more and several commissions including one from the Hertfordshire Society in the form of a carved trophy for the best-kept village sign.

The model village included timber buildings, a ducking stool, stocks, a castle and several waterfalls and streams. The village was populated with figures from children’s nursery rhymes, fairy tales and a nativity scene. Many of the buildings were automated and had moving parts operated by handles and foot pedals built into the walkways throughout the garden.

Harry also had a bell which would ring whenever someone stood on a pedal at the entrance to his model village. At the sound of the bell he would immediately appear out of his workshop and ask for the entry fee. He always made sure nobody got in without paying. As a result he gained a reputation with some villagers for being rather abrupt.

However this entry fee was often wavered for local children, many of whom would visit the model village in the evenings on their way home from school.

The woodcarver’s cottage became so well known that it attracted the attention of several press agents and was the subject of newspaper and periodical articles and a number of short films. By the end of his life the woodcarver’s cottage was internationally famous. As a result during the Second World War a number of American and Australian servicemen visited his cottage and said they recognized it from films and magazines they had seen.

The village was often very busy and on Bank holiday Mondays and Sundays crowds of cars and people queued up to see the carvings. On some occasions the numbers were so large the police had to come and direct the traffic.

Over the years many stories have grown up around the Woodcarver and his workshop. One story relates how in the year of 1942 a military lorry travelling at night along the main road through the village crashed and demolished the majority of Harry’s garden display. One of the occupants of the lorry had been asleep and awoke to find himself amongst a host of life size carvings. Finding himself lying amongst several bodies came as a big shock and initially the man thought he was dead.

This disaster didn’t seem to dint Harry’s enthusiasm and provided him with the opportunity to completely remodel the outside display. It seems he was a man whose work was never really finished.

After Harry’s death in 1971 the cottage was bought by a local business manager Tony Jaffe. His intention was to reopen the model village to the public and use the woodcarver’s old workshop as a tea room for visitors. It was also hoped this space could be used as a local craft shop and gallery.

Jaffre expressed his hopes in an interview with the Herts Evening Echo, 25 March 1972:

“Mrs Angela Hoy is managing it for me and she hopes to develop a craft shop where the work of local artists and craftsmen can be exhibited and sold.”

Some locals were sceptical however and concerned that large numbers of visitors would park along the main road and create problems for residents. Others voiced a less feasible hope that the cottage should only be sold to another woodcarver. These divided opinions probably led to the lack of coordinated action on behalf of Harry Macdonald’s workshop. Sadly it was sold to developers and demolished to make way for housing. All that remains of this local landmark are press reports, photographs, and some surviving carvings.

Local residents’ memories of the woodcarver

“In the late 40s I delivered Harry’s newspapers. In those days the paper boy collected the paper money. If I found I had foreign coins when I got home I would know who it came from. Nobody in those days lived abroad, but people from overseas would come to see the woodcarver at Woolmer Green. So I would go back to see Harry and get the correct coins.”