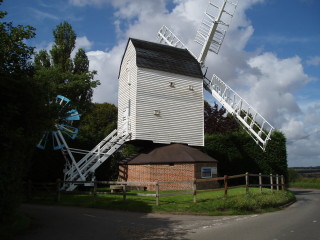 By the B1037 between Cromer and Hare Street is an artificial mound on which stands a unique structure — the only post mill left in Hertfordshire. Cromer Mill’s history goes back at least eight hundred years, with the present mill build sometime around 1681. For most of that time, the mill turned corn into flour for the farmers in the countryside around; and, though it no longer produces flour, it’s still in working order.

History of the Mill

There’s been a windmill on the site since at least the turn of the 12th/13th centuries, with the first documentary evidence from 1222. It appears to have been rebuilt a few times (in 1374, it was described as being in ruins) with the current structure built at some time before the end of the 17th century. A date can be found on a timber that probably reads 1681, which is backed up by dendrochronology dating of the main post.

The mill passed through several families between 1576, when it was bought by the Crane family, and 1933, when the last miller, Richard Hull sold up. It was blown down and rebuilt in 1861, and during the 19th and early 20th centuries a number of innovations were introduced. In particular, William Boorman, who rebuilt the mill after its collapse, replaced the traditional sails with single-shuttered sails, later upgraded to double-shuttered, and an auxiliary steam engine was added in the late 19th century, replaced by an oil engine by 1919.

By the time Richard Hull was running the mill, it had become a small-scale operation, used only for animal feed, and all milling ceased in the thirties. The mill was becoming dilapidated by then, and a group of local people reboarded and painted in in 1938. Apart from having a hole cut in the roof by the local Home Guard, who used it as an observation point during the war, the mill has remained intact since then.

In 1967, its last independent owner, George Turner, gave the mill to the newly formed Hertfordshire Building Preservation Trust, who restored it over the next few decades. Although it was first opened to the public in 1991, it wasn’t until 1998 that it was fully restored to working order.

How the Mill Works

As a post mill, the heart of Cromer Windmill is the 18 ft oak main post, to which are connected two horizontal crosstrees and four sloping quarter bars, between them supporting the weight of the mill. The sails are mounted on the buck, or main body of the mill, a wooden structure designed to turn so that the sails can catch the prevailing wind. Originally done by hand, this is now automated by a fantail, installed by Boorman, which uses wind power to turn the buck.

The grain’s journey started on the ground floor. Sacks of grain could be brought there and raised by a hoist, driven by the main wheel, up through a series of trap doors that opened under pressure from the sacks and closed by their own weight. At the very top, they were emptied into a hopper.

Here, the iron windshaft from the sails turned the great wooden brake wheel, which could be started or stopped by use of a brake. The motion was translated by an iron wallower and a spur wheel to the two great millstones — a bed stone made of French Burr and a runner stone on top made of Derbyshire millstone grit. The grain was fed in at the centre and was ground between the stones as it made its way to the edge. It then descended through a mesh of variable fineness to sort the various grades of flour into bags.

Although the mill is in full working order, its use is unfortunately limited by lack of clearance for the sails, which risk catching in a hedge and encroaching on the road. In fact, the sails were always potentially hazardous. There’s a story of a tramp who once came too close and got tossed a considerable distance.

Nevertheless, Cromer Windmill is open to the public at weekends and bank holidays during the summer months, staffed entirely by volunteers who provide an informative guided tour of the mill and a limited demonstration of it working. There’s also an excellent video you can watch before the tour — all for £2.50 for adults and 50p for children.

If you want more information about this unique Hertfordshire heritage site and how you can visit it, you can find it on the mill’s website.