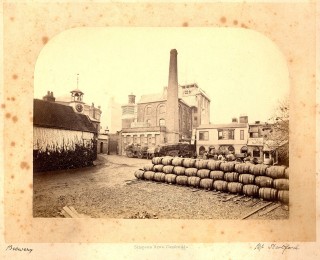 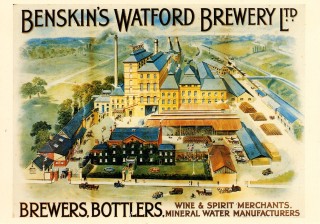 Hawkes & Co. was etablished in 1780 by Messrs. Hawkes, Bird and Woodman with money earned from supplying malt to London breweries via the Stort Navigation Canal. Hawkes & Co.’s ‘Entire’ – an early name for porter (bitter stout) – was a beer that travelled well.

By 1879 Hawkes & Co., the Brewers, Malsters, Wine and Spirit Merchants of Bishops Stortford, had their ‘Entire’ advertisement displayed on some 100 inns within ‘horse and dray’ distance of the Brewery, i.e. East Hertfordshire, West Essex and South Cambridgeshire.

Following the purchase of Hawkes & Co. in 1877 by James Wigan (previously a partner in the Mortlake Brewery), stores at Mortlake and St. Pancras suppled a few outlets in London. The beer was delivered from Bishops Stortford by rail.

Hawkes & Co., with its mitre trade mark, was sold to Benkin’s of Watford in 1898, by which time the number of outlets had risen to around 150, and eight different beers were brewed. Hawkes Brewery closed in 1916, and Benskin’s was subsequently bought by Ind Coops in 1957.