You are here: Home>New contributions>The Curious case of Mrs Ridgley and her mean-tempered Irish Terrier 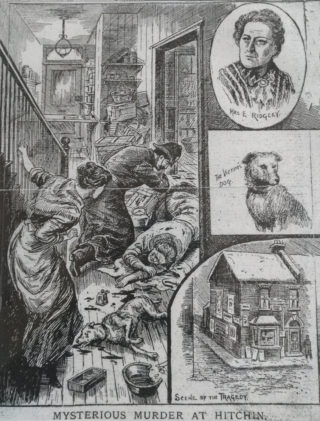 The date was January 25th, 1919. Mrs Roach, asleep in her house on Nightingale Road, Hitchin awoke in the middle of the night to some peculiar noises, bumps and thuds, and the suspicious groaning of a dog. The odd sounds where coming from next door, she sat up, “why, the old lady is killing her dog!” she exclaimed thinking aloud.

The neighbour in question was a Mrs Eliziabeth Ridgley, a widow in her 50’s and owner and proprietor of the local general store. Selling all manner of items and produce the shelves reached the ceilings filled with many years worth of wares. Kindly but eccentric, she was held in high esteem, known to be lenient on loans with customers to the store. Indeed, if It were not for the only other tenant of the building, a rather bad-tempered Irish Terrier with a habit of growling at patrons the shop might have seen even more custom.

The other interesting fact about old Mrs Ridgley was the gossip about the town of her quite considerable wealth. It was well known that general store such as hers were ‘gold mines’ and no doubt an industrious woman such as Mrs Ridgley would have amassed quite a nest egg for when it came time to retire. Whats more, it was likely that like most others she was not very fond of banks and her fortune was stashed somewhere about her property. But then, who would ever attempt burglary with the prospect of such a beast on guard?

The next morning, all was quiet. And the Monday after. Even when a young girl came knocking on the door to buy a loaf of bread for her mother, there was no answer. Later, the mother came by herself, she too found the shop closed and so walked around the back of the shop to find the back door wide open. Venturing inside she came across a grim scene indeed.

“She was lying on her face fully dressed and wearing round her neck a Khaki handkerchief deeply stained with blood.”

The poor women lay half-way out of the living room, with her head in the main passage, a short distance away was her dog, both had expired. Before long the whole street was full of residents, stricken with looks of dismay. The first law-man to arrive preserved the scene as best he could and before long a full investigation was underway.

It seems the rummers were true, stashed throughout the house where containers filled with threepenny bits that the old lady had collected also close by lay a cash bag, mysteriously empty.

No fingerprints could be found by detectives, clearly, a strong motive could be deduced in the form of robbery, however. Yet still the county police first surmised that this terrible scene may have in fact been an accident, that poor Mrs Ridgley was set upon by her own dog and was forced in desperation to strike the beast before falling and sustaining the injuries that led to her demise.

This rather dubious explanation, however, was dismissed a fortnight later after a Home Office pathologist uncovered that death had been caused by a heavy blunt object and could not have been self-inflicted. A murder case if ever there was one.

“An examination by a medical man showed that her eyes were blackened, her nose broken and her head cut evidently by some earthenware on which she had fallen.”

The perplexing nature of the case called for intervention by Scotland Yard and one of it’s brightest, ‘Whitechapel’s Sherlock Holmes’, Fredrick Wensley.

Chief Constable Wensley wasted little time, travelling to Hitchin. He began by scouring the adjoining streets with a fine-toothed comb and studying all the reports, he soon came to the conclusion that the murderer was likely from the local area. Someone who know the woman, and the dog, and the shop.

Eventually, they descended on Radcliffe Road and the lodgings of a Mr John Healy, a local labourer currently working on a government building close by. It was Wesley himself who decided to take him in, satisfied that he had his man.

The trial took place at Hertford assizes, Presided over by Mr Justice Darling. Mr Healy, an ex-soldier, seemed to fit the bill of the culprit quite well, said to have been ‘lurking’ outside of the shop as well as owning items of clothing stained with blood which were conducive to the type expected from an attack of this kind. Furthermore, Mr Healy had a number of injuries, including scars on his fingers and knuckles, bites from a dog perhaps?

Mr Healy however, reasoned that the blood and the injuries were sustained whilst working, commonplace for someone in his line of work. And a patch of blood on his jacket’s shoulder was from helping a fellow worker who had cut his head.

The jury was swift in their decision needing only a few minutes to agree on a verdict, concluding that the evidence was too circumstantial to convict and as such Mr Healy was found “not guilty!”.

And so, with no other suspects, the case had gone cold, leaving a stain on Mr Wensly’s record and leaving Mrs Ridgley and her dog’s murder forever unsolved.

(Based on an article by Norman Hastings in the Thomson’s Weekly News, published 22nd March 1919)