You are here: Home>Herts history>People>Politicians>A Politician in Fear for his Freedom

A Politician in Fear for his Freedom 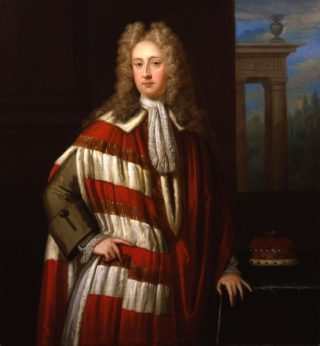 Reading letters from one major statesman to another can reveal more than just the plain facts of a political change of regime.  One of the joys of the Hertfordshire Archives is the collection of letters to Lord Cowper, the Lord Chancellor in the early eighteenth century, which give insight into the minds of the men in (and out) of power.  Two of these letters are from the recently dismissed Tory Secretary of State, Lord Bolingbroke, clearly in a state of panic at what the new King George I and the Whig ministry were likely to do to him now that they had taken over the reins of government.

Bolingbroke, the Tory Secretary of State in Anne’s last government was an interesting character, very intelligent, charming and handsome he was also a rake and an untrustworthy colleague. Nicknamed the ‘Man of Mercury’, the letters transcribed below, when taken in context, give some indication of his dubious integrity. They highlight his anxiety as he fears for his liberty when the incoming Whig ministry begin to flex their muscles and take revenge on their new opposition. The background to this scenario is the death of Queen Anne on 1st August 1714, just over a month before these letters were written.  Her passing finished an era in British history and brought the Hanoverian dynasty into the country.  Within a year three members of the former Tory ministry, including Bolingbroke, were summoned to stand before Parliament accused of misconduct while they were in office. Rather than face the impeachment proceedings, Bolingbroke fled to France which immediately cast doubt on his loyalty to the new regime and suggested he harboured Jacobite leanings.[1]

But while the new ministry were finding their feet Bolingbroke felt he needed to cosy up to one of their influential members, and Lord Cowper fitted the bill exactly.  The protestation that he would now retire into a private sphere should be read alongside the knowledge that he had accepted a position with the Jacobites in France only a year after these letters were written. With this in mind here is the correspondence:

I take this way as the least troublesome for your lordship, before I go out of town, of making a big compliment for the humane and generous treatment which you was pleased to give me upon a late occasion. There are few who can execute a harsh commission in such a manner as to oblige even the person immediately affected by it, tho my lord you have done, and however in the  distracted state of British affairs we are and we may be divided in different parties I do assure your lordship of a true profound respect for your lordship. I shall appear in every instant where I can shew it and that it shall become an inseparable part of my most faithful and obedient humble servant.

Tho I do not mean to draw you, who have so much business into a formal correspondence with one who has none, and who heartily desires to have none, yet in the answer you have honoured me with in my first letter, there are some passages which touch so very sensibly, that even the apprehension of being importunate cannot determine me to be silent.

I am rash my lord, I confess it, apt to resent too soon, and to express my resentment too forwardly.  But good always disarms me, and I protest very sincerely  that you have covered me with confusion. I am ashamed of having harboured the thought that your lordship could use me ill unprovoked who could use me so generously after provocations which I cannot forgive half so easily as you do.

I thank your lordship most heartily for your kind wishes.    To retire was what I earnestly proposed for in circumstances which, whatever appearance they might carry to the world, were to me on many accounts disagreeable, and I assure you with great truth that I have not the least desire to return to business again. I am contented with my fortune and time does not lie heavy on my hands. I solemnly assure your lordship that neither party, nor any other consideration shall.

May your lordship meet in the great scene which you are going to fill with none of those mortifications which fall to the lot of such as serve the public in this enchanted land  if you do and perhaps you may, face those who serve best are often most  exposed, solemnly assure your lordship that neither party nor any other consideration shall  hinder me from expressing the sense I have of my obligations to you in the best manner to you in the best manner, that is by my conduct and from shewing that if your lordship has not gained a useful [friend?] you have gained an honest and a grateful man in your lordship’s most faithful and obedient servant in my lordship’s most faithful servant.