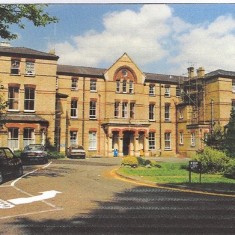 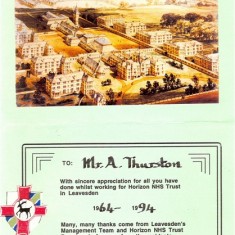 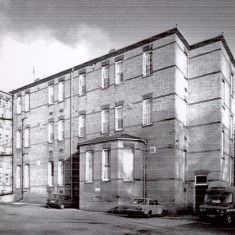 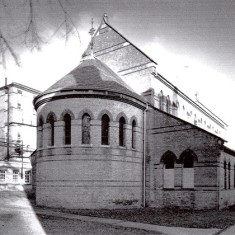 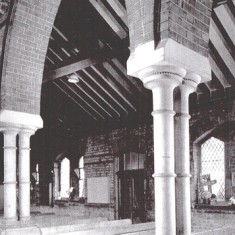 Inside the Church
Alan Thurston 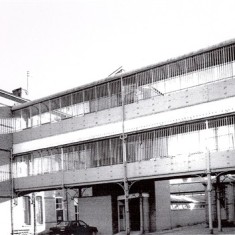 Thirty years of my working life was spent as an employee in the works department of Leavesden hospital in Abbots Langley.  It was built by the Metropolitan Asylums Board in the late 1860’s and opened in 1870 as a home for imbeciles and other socially vulnerable people mainly from London and surrounding areas.  The site where it was located was at the time of its construction very rural and planted with a vast collection of trees, thought to be one of the finest in Hertfordshire.

An attempt was made by the Victorians to make it as self supporting as possible.  It contained its own bakery, laundry, kitchens, church, recreation hall, pig farm, chicken farm, orchards and cereal and vegetable crops.  Many tradesmen were employed, for example engineers, carpenters like myself, plumbers, bricklayers, painters, upholsterers, tailors, shoe menders, tinsmith, blacksmith etc.  Encouragement was given to staff who wished to be actively involved in sport and to that end the hospital contained its own football pitch, pavilion and changing rooms, cricket field and pavilion, two enclosed tennis courts and bowling green.  There were county leagues for these and other sports in which many cups and trophies were won by Leavesden hospital over the years.

My memories of Leavesden hospital are many and varied but in particular a tremendous respect for the Victorian design of the buildings, of the strength and durability that lasted 125 years and more if it had been allowed.  Unfortunately the hospital was closed and knocked down in 1996 two years after I left.