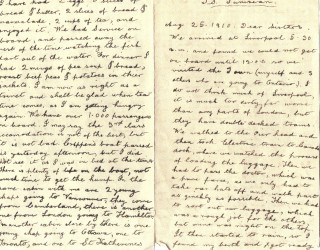 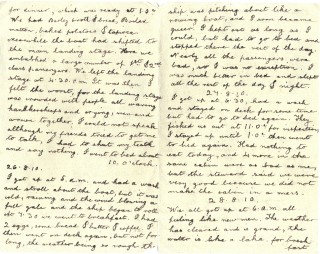 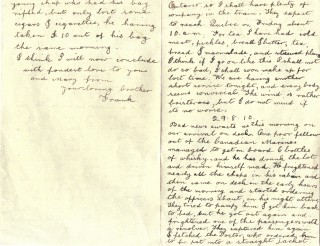 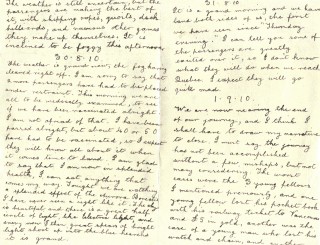 As a child, the writer who has lived in Hertfordshire for over 40 years, had heard of “great uncle Frank” who had emigrated to Canada many years ago. It was not until a death in the family necessitating going through old papers brought to light a letter written to his sisters 100 years ago detailing uncle Frank’s journey by immigrant ship from Liverpool to Quebec.

By modern standards, conditions for the 7 day voyage seem basic and cramped, with ”1000 third class passengers” alone on board, there seems to be no shortgage of happenings – being overtaken by “Crippen’s boat”, a Canadian marine having to be “put into a straight jacket” after getting though “6 bottles of whisky” and “frightening passengers with his revolver”. Additionally a further “two more passengers were put under restraint”.

Also in the papers was a clipping from a Canadian newspaper, 52 years on – in 1962 – showing a photo of uncle Frank, by now blind, and playing the piano with one of the sisters to whom the letter (reproduced) was addressed.

It would seem that, after arriving in Canada, uncle Frank had tried farming, without success, and then gone into industry. In 1915 he enlisted in a Canadian Dragoon regiment and served throughout the First World War. Unfortunately, no-one now survives who I can ask for more information.

Dear Sisters,   We arrived at Liverpool 5.30am and found we could not get on board until 12 o’clock so we visited the Town (myself and 3 others were going on to Ontario). I did not think much of Liverpool, it is much too dirty, far worse than any parts of London, but they have double decked trams. We walked to the pier head and then took electric train to Canada dock, where we watched the process of loading the baggage. Then we had to pass the doctor, which was a pure farce as we only had to take our hats off and walk past as quickly as possible. Then we had to sort out our luggage, which was a rough job for the others, but mine was right on the top.   It then started to rain, so I found my berth and got ready for dinner, which was ready at 1 o’clock. We had barley broth & bread, boiled mutton, baked potatoes and tapioca. Meanwhile the boat had shifted to the main loading stage. Here we embarked a large number of 1st and 2nd class passengers. We left the landing stage at 4.30 pm. It was then that I felt the worst, for the landing stage was crowded with people all waving handkerchiefs and crying, men and women together. I could not speak, although my friends tried to get me to talk. I had to shut my teeth and say nothing. I went to bed at 10 o’clock.

I got up at 5 am and had a wash and stroll about the boat, but it was cold, raining and the wind was blowing a full gale and the ship began to roll. At 7.30 we went to breakfast. I had 2 eggs, some bread & butter & coffee. I then went on deck again, but not for long, the weather being so rough the ship was pitching about like a rowing boat, and I soon became queer. I kept out as long as I could, but had to go to bed and stopped there the rest of the day. Nearly all the passengers were bad, so I was no exception. I was much better in bed and slept all the rest of the day & night.

I got up at 6.30 had a wash, and stayed on deck for some time, but had to go to bed again. They fished us out at 11 o’clock for inspection. I stayed up until 1 o’clock an then went to bed again. Had nothing to eat today, and 4 more in the same cabin were as bad as me, but the steward said we were very good because we did not make the cabin a mess.

We all got up at 6 am, all feeling like new men. The weather has cleared and is great, the water is like a lake. For breakfast I had 2 eggs, 3 slices of bread & butter, 2 slices of bread & marmalade, 2 cups of tea, and enjoyed it. We had Service on board, and passed away the rest of the time watching the fish dart out of the water. For dinner I had 2 mugs of pea soup & bread, roast beef peas & potatoes in their jackets. I am now right as a trivet and shall be glad when tea time comes, as I am getting hungry again. We have over 1000 passengers on board. I may say the 3rd class accommodation is not of the best, but it is not too bad. Crippen’s boat passed us yesterday afternoon but I did not see it as I was in bed at the time. There is plenty of life on the boat, not much time to get the hump. In the same, cabin with me are 2 young chaps going to Vancouver, they come from Cumberland, there is another one from London going to Hamilton. In another cabin close by there is one young chap going to Ottawa, one to Toronto, and one to St. Katherines Ontario, so I shall have plenty of company in the train. They expect to reach Quebec on Friday about 10 am. For tea I have had cold meat, pickles, bread & butter, tea, bread & marmalade and stewed plums. I think if I go on like this I shall not do so bad. I shall soon make up for lost time. We are having a short service to night, and everybody seems convivial. The wind is rather boisterous, but I do not mind if it it’s no worse.

Bad news awaits us in the morning on our arrival on deck. One poor fellow out of the Canadian Marines managed to get on board 6 bottles of whisky, and he has drunk the lot and driven himself mad. He frightened nearly all the chaps in his cabin and then came on deck in the early hours of the morning and started ordering the officers about, in his night attire. They tried to pacify him and got him back to bed, but he got out again and frightened one of the passengers with his revolver. They captured him and fetched the Doctor, who ordered him to be put into a straight jacket. The weather is still uncertain, but the passengers are making the best of it with skipping ropes, quoits, deck billiards, and various other games they make up themselves. It is inclined to be foggy this afternoon.

The weather is grand now, the fog having cleared right off. I am sorry to say that 2 more passengers have had to be placed under restraint. This morning we are all to be medically examined, to see if we have been vaccinated all right. I am afraid of that. I have been passed all right, but about 40 or 50 have had to be vaccinated, so I expect they will know all about it when it comes time to land. I am glad to say that I am now in splendid health, so I can eat anything that comes my way. Tonight we are watching a splendid effect of the Aurora Borealis. I have never seen a sight like it. The sky is beautiful and there is a great half circle of light, like electric light, and every now and then great spears of light shoot up into the blue heavens. It is grand.

It is a grand morning and we have land both sides of us, the first we have seen since “Thursday evening”. I can tell you some of the passengers are greatly excited over it, so I don’t know what they will do when they reach Quebec. I expect they will go quite mad.

We are now reaching the end of our journey & I think I shall have to draw my narrative to close. I must say the journey has not been accomplished without a few mishaps, but not many considering. The worst cases were the 3 young fellows I mentioned previously, and one young fellow lost his pocket book with his railway ticket to Vancouver and £5 in gold. Another was the case of a young man who lost his watch and chain, and another young chap who had his bag rifled, but only lost some cigars and cigarettes, he having taken £10 out of his bag the same morning.   I think this will concluded, with fondest love to you and Mary.   From your loving brother   Frank