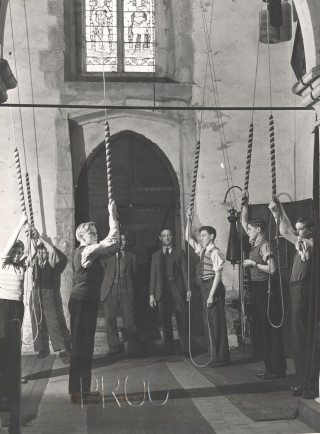 In 15th century, St Leonard’s church tower was raised a stage, to accommodate bells. Its increased weight had to be supported by huge angled brick buttresses. The Norman arch also came under strain from the extra weight and so a pointed reinforcing arch was added within it.

The bells themselves weigh almost 50 tons in total. Five of them were made by Anthony Chandler of Drayton Parslow in 1664, and may have been cast on site near what was (or possibly was renamed as) the Bell public house on Trowley Hill Road. The sixth, treble bell was added in 1729, made by John Waylett. This bell also acts as the strike for the clock.

The belfry mezzanine floor has recently been reinstalled in the tower. These works have revealed graffiti, dating from when bell-ringers whiled away the time in 19th century.

In the ringing chamber, the tower’s huge buttresses used to restrict the view of the bell-ringers, which tragically led to a fatal accident in 1893. One of the team, trying to see his colleague ringing, got his foot caught in a rope; he was dragged up and then fell on his head. Mirrors now allow better visibility of the other bell-ringers.

In 1928, the bells were taken down from the belfry to be tuned. They were then rehung and rededicated. This work cost £245, of which £60 was contributed by the bell-ringing team themselves.

The six bells have been described by visiting bell-ringers as “the sweetest peal in Hertfordshire”. We look forward to hearing them again in 2021, when the works have been completed and the church reopens.

A set of hand bells was donated to the church in 1908. They are still used on occasions.