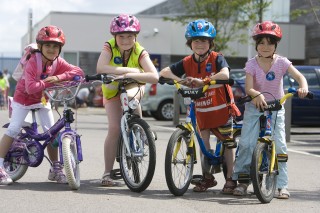 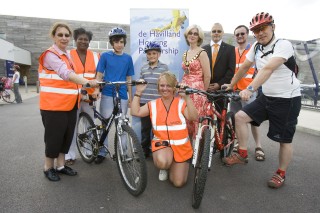 Mums, dads and delighted kids got on their bikes for the Tour de Havilland June 14.   Mayor Councillor Kim Langley and her husband Neil came to wave off the first group on the three-mile circuit. She said: “This is a wonderful idea, I hope it will become an annual event.”

The route began at Howe Dell Community Hall,and took riders round the old airfield on the extensive network of new cycle paths.   Kids answered Treasure Hunt questions on the way, and the police security-marked bikes free of charge.   Several families said it was the first time they had all been out together on their bikes.   James Humphrey and his son Harrison (5) were one of the first groups back. James said: “It was brilliant, Harrison has only had his stabilisers off three months.”   The youngest rider was Chloe Richardson at three and a half. Her mum Karen said: “It was a lovely route, I hadn’t realised there were so many nice quiet places to cycle around here.