High Wych's history of the blacksmiths 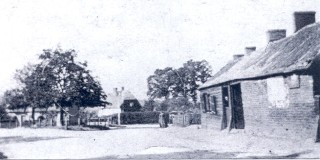 From the early eighteen hundreds until about 1920 a Blacksmith’s Forge stood in High Wych. When exactly Joseph Smith, born in 1802 in Sawbridgeworth, started his business in High Wych is not certain. The 1839 Tithe map, however, shows Joseph as occupying plot 484 (next door to 485 – the Half Moon Public House). The plot was owned at the time by the trustees of Thomas Nathaniel Williams who also owned the Manor of Groves. Two years later, at the 1841 census, Joseph is registered as a Blacksmith and living with his wife Jane, sons Charles, Joseph and Samuel plus daughters Jane and Julia.

Ten years later Joseph Smith Jr. is still there whilst his wife is registered as a grocer. Sons Charles and Samuel are also registered as Blacksmith. Joseph Jr., born in 1830, lives next door with his wife, confusingly also called Jane who is 15 years his senior. Joseph and Jane have a 9 month old daughter; Emily. Also living with them are four sons in law and two daughters in law, all with the surname Brace.

By 1861 Joseph Jr. and his wife have 4 more children, one of which, another Charles, born in 1860 grows up to join the family business, which he will then carry on for many years. Charles marries Annie Wilson and they have ten children. One of the girls, Elsie, later marries Arthur Sapsford, the manager of Rivers Nurseries. Another, Emily, marries Arthur (Duchy) Ward with whom she manages the village shop and post office. After Ward’s death Emily marries Arthur Lindsell and as Mrs. Lindsell she continued at that shop until the early nineteen sixties.

Local news can be found at High Wych and Allen’s Green website.