Memories of World War Two in the village of Smallford 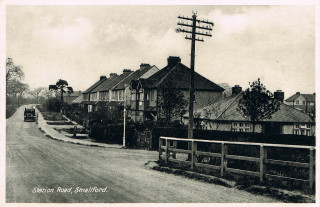 Names of Some of our Neighbours in Station Road

I have tried to remember as far as possible the residents of Station Road, starting at the junction with Wilkins Green Lane and moving towards Hatfield Road.   To the best of my recollection they were as follows:-

(a) Right hand side

From here on my memory gets a bit muddled as to exactly which house was which, but the following are those I can remember (in no particular order):-

(b) Left hand side

Station House - Mr & Mrs Haynes (Stationmaster)
Alpha - Mr & Mrs Christensen (owners of the tomato nursery) and son Peter, who was confined to a wheelchair having suffered polio as a child.

I do not have much recollection of the people who lived in Sandpit Lane, which was of course, the other side of the main St. Albans to Hatfield Road, and I would not have gone there, unless with a parent.   However, there are two other roads, some of whose residents I do remember.

1  Mr. & Mrs Roddy and sons Patrrick & Terry
2  Mrs Blisset and daughter Edie
11 Mrs Rogers (who is best remembered as a most eccentric lady, who bore the brunt of many practical jokes by children.   Her response was to throw a bucket of water over us.   We daren’t go home wet, for fear of a beating!)
12 Mr & Mrs Mason
14 Mr & Mrs Carpenter and daughter Thelma
15 Mr & Mrs Iddenton and sons Roy & Frederick
17 Mr & Mrs King and daughters
18 Mrs Pugh, daughters, Daphne and Celia, and son Michael
20 Mr & Mrs Last and sons, Jack, Kenneth and Alan (known to all as Dickie, due to his diminutive size).