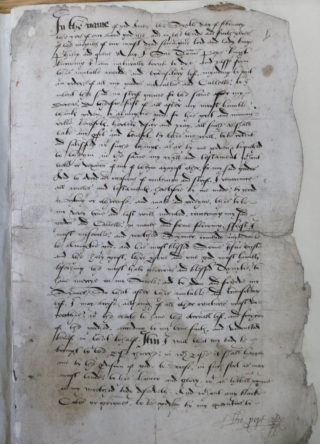 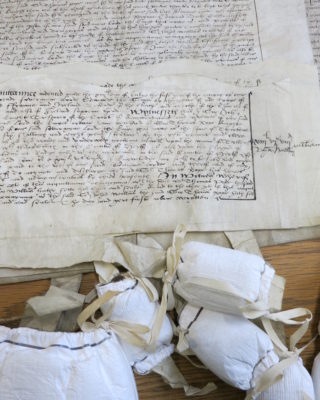 The Tower of London is an interesting but ultimately forbidding place even today. How much more so in the sixteenth century and if you were a prisoner it must has been a very dark place indeed. Sir Thomas More had been in the Tower for over a year and on the evening of the 7th July 1535 was expecting a visitor, a man who had served under him in times gone by but had now risen to become Warden of the Mint. Unfortunately, the visitor brought the bad news that More was to be executed in the morning.

The name of this visitor was Thomas Pope who is the subject of this article. He was born in Oxfordshire in 1506, was given a good education at Banbury School, went on to study at Eton and subsequently entered The Chancery where he was probably articled to John Croke, one of the six Clerks. The chancery was responsible for drawing up official documents, such as writs and letters patent and so Thomas would have become familiar with much of the way the law worked and the terminology used. It was here also that he would have come into contact with Sir Thomas More who was Chancellor at the time.

By 15 October 1532 he had risen to become Clerk of the Writs in the Star Chamber at an annual fee of £20. This court, named after the room in which it sat, was the judicial arm of the King’s council at Westminster, dealing with mainly criminal cases. Later he moved on to work for Thomas Cromwell assisting him in the purchase of land, which experience went on to serve him well for a future role

Two years later he was Warden of the Mint in the Tower of London where he would have been responsible to the King for checking the purity of the bullion entering the kingdom. This was a position he held during the years 1534 to 1536 and it must have been while he was warden that he visited Thomas More. These years were good for Pope who must have been very well thought of to have been given a grant of arms while still relatively young. These were granted under the authority of the crown and often in Tudor times for significant contributions to the country.  Thomas received his on the 26 June 1535.

But in many ways his most significant appointment came as a result of the dissolution of the monasteries. At this time monastery buildings became crown property. However what Henry, who was at war with France at the time, wanted, was not more property, but more money. Therefore the Court of Augmentations was set up in 1536 to add to (augment) the king’s revenue and administer the estates and financial assets of the now dissolved monasteries. Many of the properties were sold to private individuals, which provided an opportunity for men like Pope to advance their own interests. This was particularly the case during the years 1543 onwards when Pope was serving a second time having resigned as treasurer in 1540. During these years Sir Thomas, as he now was, acquired a great deal of property, much of it in Oxfordshire.

In 1537, he was knighted and also became clerk of the Crown in chancery a department which was responsible for keeping the Great Seal as well as having a role in preparing letters patent and other documents, such as warrants, requiring its use. This was a position he was to hold until 1544.

Thomas continued to deal in property and in 1547 was granted the house and grounds of Tittenhanger. The original owners were the Abbot and monks of St Albans Abbey who used it as a country retreat. Having spent many years opposing the religious reforms of Henry VIII, the abbey finally surrendered to the Crown in 1539. That surrender was taken by Thomas. It became crown property and was subsequently conveyed to Thomas by Henry VIII for services rendered. This was later confirmed by letters patent of Edward VI. The original house was pulled down, but was re-built between 1401 and 1411. This was the house that Thomas was to hold and to use as his main country residence.

During the reign of Edward VI, Thomas was somewhat out of favour, but things changed again under Queen Mary when he was appointed to serve as a privy counsellor and so became one of the most powerful men in England. Also, between 1552 and 1557 he was twice Sheriff of Hertfordshire and Essex.

By this time. he had become a very rich man and was determined to put at least some of his wealth to good use. And so, on the 20 Feb 1555, he bought the site of the defunct Durham College, Oxford, where he intended to set up a new college. Permission, by letters patent, to found what is now Trinity College was given on the 8 March that same year and on the 1 May the first students were admitted.  In his will, he also left £100 to build a wall to enclose the ground.

In 1556 Princess Elizabeth was released from Ashridge House and moved to Hatfield. Thomas Wharton, Pope’s biographer describes how Queen Mary continued to put great trust in Sir Thomas appointing him as governor to Princess Elizabeth ‘as a person with whom the princess was well acquainted, and whose humanity, prudence and other valuable qualifications were all calculated to render her new situation perfectly agreeable. To this lady Sir Thomas behaved with utmost tenderness and respect: residing with her at Hatfield, rather as an indulgent and affectionate guardian, than an officious or rigorous governor.’ The last years of Mary’s reign, which the princess passed at Hatfield with Sir Thomas Pope, were by far the most agreeable part of her time during that turbulent period. In fact, they seem to have got on rather well. Indeed, at one point Thomas had even arranged and paid for an entertainment for the princess with music, a tournament and a banquet. However, Queen Mary, who was not noted for her sense of humour, was not amused and suggested that Thomas take his duties more seriously in future.

In 1557, while Elizabeth was still at Hatfield, Thomas became involved in a subject which was to arise time and again during Elizabeth’s life. The princess had received an unexpected visitor: the Swedish Ambassador who had gone straight to Hatfield not knowing that he should have first gone to the Court in London. His purpose was to enquire whether Elizabeth would consider marriage to Prince Eric. On learning of this Elizabeth informed Queen Mary who asked Sir Thomas to find out what Elizabeth’s reaction was likely to be. She told Thomas to inform the Queen that she had had other proposals already and that she was quite happy in the single state. At one point Thomas enquired if Elizabeth might marry in the future. She replied ‘What I shall do hereafter I know not, but I assure you that on my truth and fidelity, and as God is merciful to me, I am not at this present time otherwise minded than I have declared unto you, no, though I were offered the greatest prince in all Europe’

During his lifetime Thomas had obtained great wealth and influence. Nearing the end of life, in 1556 he made his will in which he appoints, among others Sir Nicholas Bacon as one of his executors. Seventeen pages long It consists mainly of bequests to relatives with books and silver being given to Trinity College. He died on the 29 January 1559 at his house in Clerkenwell, London, his remains were later transferred to Trinity College where a monument was erected to his memory.