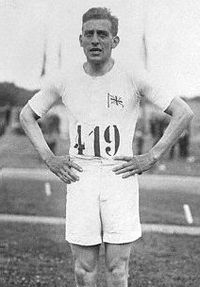 Harold Abrahams
From an old photograph 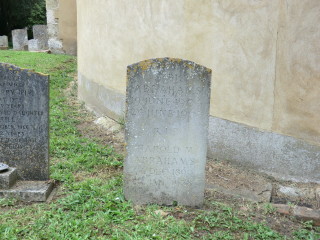 With the 2012 Olympics being so close, it is worth remembering a famous British athlete who now rests in the churchyard at Amwell.

Many will be aware that Harold Abrahams had his great achievement re-chronicled, in the 1981 film ‘Chariots of Fire’

Jewish by birth, Harold Abrahams originated in Bedford. His brother Sidney, also an athlete who completed in the 1908 and 1912 Olympics, encouraged him in his athletics career.

Fame came to Harold Abrahams in the 1924 Olympics in Paris where, in the face of highly confident American competition, he took the ‘gold’ in the 100 metres final. Later in the games he competed in the 4×100 metres relay, helping Great Britain to achieve a ‘silver’ in the final.

Harold Abrahams later became President of the Amateur Athletic Association and a respected writer and broadcaster. Converting to catholicism in 1930, he married D’Oyly Carte mezzo soprano, Sybil Evers, in 1936.

The grave is easily found, close to the wall of the church.