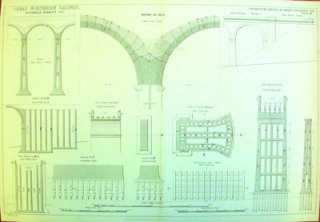 As well as the men themselves, there are some fascinating records within the collections which reveal great scientific achievements. This viaduct, 1,545 feet long and 97 feet high at the centre of its 40 arches, is a wonderful monument to the engineering of the railway age.

Built to carry the Great Northern railway over the Mimram Valley, it was designed by William Cubitt, the architect of Kings Cross station, and the project was managed by the engineer Thomas Brassey. It cost £69,397 to build and is estimated to contain over 13 million bricks all of which were made very near to the viaduct itself.