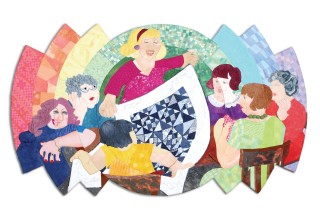 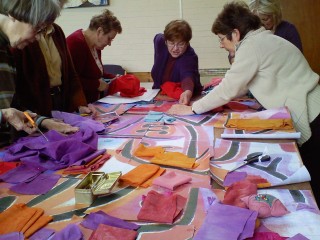 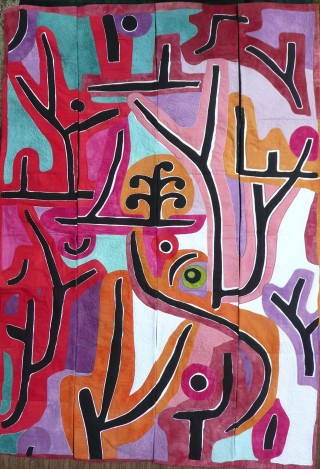 Following on from the success of the prize winning ‘View from Here’, the first group quilt that New Horizons made the group felt they needed another challenge.

One talented member designed ‘Daphne and Friends’ inspired by Beryl Cook paintings and each member of the group was assigned a section of the wall hanging to make in their own style.  Much agonising ensued as people traded arms for legs and hair for chairs.  As the piece was made the characters of Daphne and her fellow quilters developed, if you have ever attended a quilting group I’m sure you will have met them!   Assembling the quilt was a joint effort and then Daphne was dispatched to the Festival of Quilts at the NEC in Birmingham where she amused many visitors.  Invitations to travel, nationally and internationally followed and this piece of work became better travelled than many of her makers.  Early in 2009 the group were delighted to receive the news that the recently opened QuiltMuseum in York had decided to accept the wall hanging in to their permanent collections.  In March the group bid Daphne a fond farewell as headed north to her new home.

This project, finished in summer 2008, was simpler in concept.  A favourite piece by the artist Klee was enlarged and then divided into an overlapping brick pattern.  The enlarged sections were drawn out onto pelmet Vilene, fabrics and threads were hand dyed and each member went away with a suitable stash and created their own mini masterpiece. The finished bricks were re- assembled into four sections which hung together.

Plans are afoot to start a new joint project in autumn 2009 so watch this space for developments!!