Being a Games Maker

My experience of volunteering at the Olympic Games in 2012 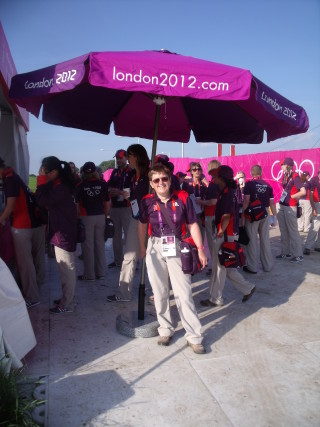 I was delighted when I was selected as one of the team of ‘Games Makers’, especially as only about one in four applicants was successful.  I applied to be part of the Events team and was allocated to the white-water canoeing at Lee Valley Park and the mountain biking at Hadleigh Farm in Essex.  I did four days at the former and two at the latter.  My duties included talking to people who were queueing before the gates opened, checking tickets and generally being helpful and welcoming!  My last day at Lee Valley was the highlight, as I was inside the stand and experienced the fantastic atmosphere for myself.  I saw the race where the British teams won gold and silver and I will never forget the excitement it engendered.  I was helping to look after people in wheelchairs and one of the ladies, who managed to stand for the singing of the National Anthem, had been a diver in the 1948 Olympics in London.

I have never known British people to be so happy, positive and determined to have the best time of their lives.  If only we could have bottled that spirit, to see us through difficult times.  I regard being a Games Maker as one of the highlights of my life.