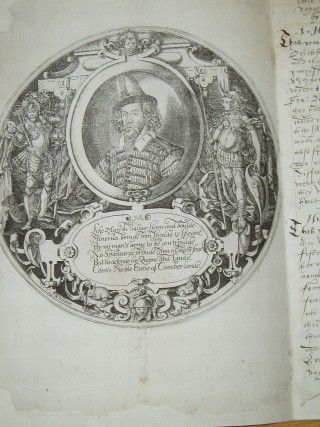 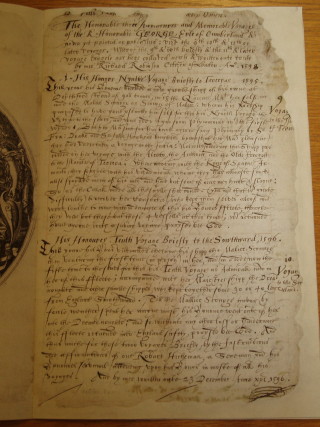 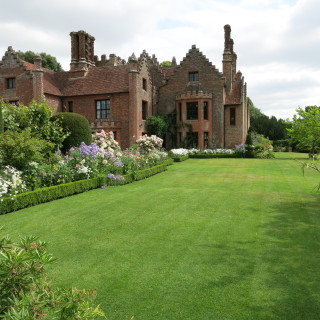 Chenies Manor and Garden
I Fisher 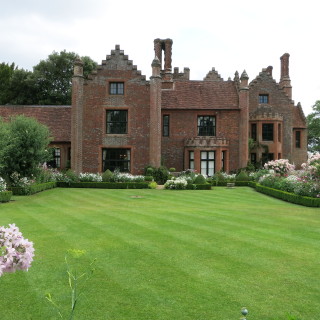 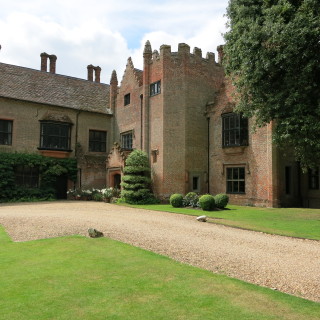 If ever a man was born with all the advantages to enable him to succeed in life, that man was George Clifford. He was born in 1558 at Brougham Castle, Westmorland to Count Henry and Countess Ann – formerly Ann Dacre. At this time his father had vast estates in Westmorland and Yorkshire as well as other property in Cumberland, Durham and even London, which would have made the Cliffords one of the wealthiest families in England. George would have been aware that with great wealth came great responsibility. From an early age he would also have been aware that the estates required proper management to ensure their continued viability; and that the interests of the family were properly taken care of.

However, his most formative years were spent not in the north but nearer to London and Queen Elizabeth’s Court. In 1569 he was sent to live with his aunt, Magdalen Dacre, at Battle Abbey. But within a year his father had died and at this point it was decided to place the young Earl with his future father-in-law, Francis Russell, at Chenies in the Manor of Rickmansworth.

In Earl Bedford’s household he was well provided for. He also had access to The Court and Parliament which gave him both entertainment and political know how. While at Court he had already met the mariner and explorer Martin Frobisher and had developed an interest in the wider world. Though he attended both Oxford and Cambridge; it was at Oxford that George’s interest was further increased through attending lectures by Thomas Hakluyt on navigation. The information he gained was to be of great use to him in later years, but in the meantime there were other matters to attend to.

In 1579 on coming of age, he went back home to see to the management of his properties. His inheritance in Yorkshire alone included 34 Manors, as well as others that would come down to him in due time. The management of these would no doubt have taken a great deal of time. In addition he had public duties to perform, as in 1582 he was appointed to serve on the Council in the North. However all of his efforts to maintain his estates were to be undermined by his decision the following year to move back to London so as to be in attendance at the Royal Court.

His previous spell at Court had brought out not just a love of pleasure, but also a spirit of competition, especially with regard to the martial arts, and jousting in particular. As well as the high cost of providing armour, horses and the like, there were also debts to be paid, which resulted from the wagers that took place. As debts mounted George started to borrow against his estates. So much so, that at one point he was barely able to pay the interest. In order to try and rectify the situation he turned to privateering. With many of his ventures he managed to cover his costs, but only two showed any profit. A voyage in 1589, a joint venture with Queen Elizabeth, was particularly unlucky for him: after capturing a ship with a cargo valued at £100,000, the prize was then lost in a storm before it could be brought into port. The result was that by 1591 he was still in debt to the tune of £6800 and selling property.

It is against this background that the three voyages set out in the accounts to follow took place. They are probably copies of the original accounts of William Myddleton who served under the Earl, and have come to Hertfordshire Archives by way of the papers of Sir John Witterwronge of Rothamstead who married Mary Myddleton the daughter of Sir Thomas, William’s brother.

One of the main aims of these voyages was to capture the large Spanish and Portuguese carracks trading between Europe and the West Atlantic ports and islands.

In order to undertake these particular voyages, the Earl had borrowed yet more money to build the Malice Scourge, a large fighting ship of 600 tons. On the ship’s first voyage in 1595, he was unlucky in missing the much wished for prize. The voyage the following year was no better, being cut short when the Malice Scourge’s main mast was lost in a storm – a misfortune which was to be repeated during the voyage to the Caribbean.

The Earl’s eleventh voyage was to be something of high point in Elizabethan maritime adventures. The account is headed 1597, although subsequent entries suggest it was probably 1598. As can be seen from the account, the fleet’s course down the coast of Portugal and on to the Canary Islands was action packed, even before they set sail for the Caribbean and Porto Rico.

Although many of the details of his action to capture the fort of El Morro situated on the small Island of San Juan are missing from this particular account, the bare facts are largely present. The first attack seems to have failed, but by attacking via a causeway Earl George attained his objective. In doing so he achieved success where Francis Drake had failed, although he nearly drowned in the process.

He was now in possession of one of the most important bases in the Caribbean from which to attack enemy shipping. Once again however fate was to intervene. Disease ravaged the colony and, having lost many men, the English were forced to abandon the island. There were to be further losses of both ships and men on the homeward voyage.

Back in England, he found himself still deep in debt. Having for many years placed personal glory and ambition above family responsibility, he saw his marriage fail. By the time of his death his family were left in great difficulty financially. Sufficient to say perhaps that when his funeral was held at Skipton in 1606, his wife and daughter did not attend.

For a full and interesting account of the life of George Clifford see: Spence, R T (1995) The Privateering Earl, Alan Sutton Publishing

The first voyage only is presented here, with the remainder available via the accompanying PDF

The Honorable three Adventures and Memorable Voyages of the R. Honorable GEORGE Erle of Cumberland and never yet printed or Published: vizt the 9th, 10th, and 11th or later voyages. Wherof the 9th and 10th briefly and the 11th and later voyage are largely here collected newly and written oute truly by mee Richard Robinson. Citizen of London. Anno1598   His Honors Nynthe Voyage Briefly to Terceras 1595   This yeare his Honoure buylded a new greate ship of his owne at Depthford Strond of 900 tonnes, which the Queenes Majestie herself named the Malice Scourge or Scourge of Malice wherin his Lordship purposed to have gone personally him self for this his Nyneth Voyage the fifth tyme to the seas, and was redy to goo from Plymouth with the first wynde. But her Majestie sent for him back ageayne from Plymouth by Sir Francis Drake and Sir John Hawkins knights by cause (at her Majestie’s pleasure) they had undertaken a voyage to the India: Notwithstanding the ship proceeded on her voyage, with the Alcedo, the Anthony and the Olde freegott to the Islandes of Tercera. Where meeting with the Kinge of Spaynes Armardo, they fought with his Viz [Vice] Admiral whome the have almost suncke also spoylled many of his men and had but some of our men hurt and slayne: So as the Carak made all the saylle she could (yea and that with greate difficulty) to recover her consortes, who kept themselves aloof and were loathe to come with in danger of this his Honors Fleete thoughe they were but these but these 4 vessells at this tyme; which returned home ageane with a saving voyage, praysed bee God.