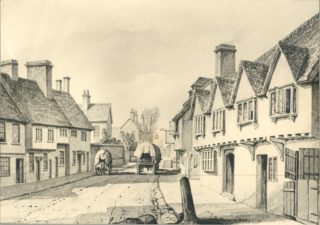 Rabies is infectious to most mammals, including humans. Its terrifying symptoms, though, including foaming at the mouth and crazed behaviour, are associated so strongly with dogs that it’s been commonly referred to as mad dog disease.

Before its causes and cure were known, outbreaks of “mad dog disease” could cause mass panic. During the 17th and 18th centuries, restraint orders were often issued for dogs, and appropriately enough this was especially true in Barkway. Here, the original order was made only for a month, but it continued to be extended right up until June 1886. Besides ordering children to stay away from all dogs, owners were compelled to muzzle their dogs, with severe penalties for anyone who broke the ruling.

This was a drastic measure in a farming economy with numerous working dogs, showing how widespread were both the disease and the fear of it. Before a vaccination was developed in the late 19th century by Louis Pasteur and Émile Roux, other cures were tried. According to the folk of Barkway, the most effective cure for “mad dog disease” was to take a small piece of cheese rind and write on it the Latin poem dedicated to dogs which begun “Deibus orebus.”  You then fed the cheese to the dog — assuming, that is, it had not already bitten off your hand.

This may seem a ridiculous measure to us, but the good folk of Barkway insisted that it worked. After all, no child died in Hertfordshire from “mad dog disease”, so maybe they knew better than us. Or maybe it had more to do with the draconian local laws on muzzling dogs.