The Blind Fiddler of Anstey 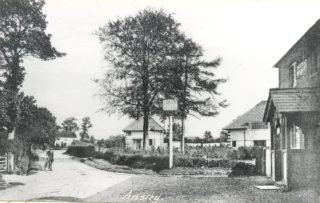 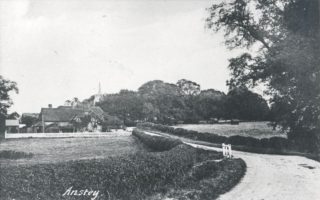 One of many villages to the north-east of Buntingford, Anstey was evidently significant enough in mediaeval times to have had a castle. It also produced the curious legend of Blind George the fiddler and the Devil’s Hole.

The Devil’s Hole is a tunnel rumoured to run from a chalk pit called Cave Gate to the castle. It’s said that no-one had dared explore to find out the truth of the story until one night, at least two centuries ago. A blind fiddler called George was playing and drinking at the Chequers (now called The Blind Fiddler) in the village when talk turned to the Devil’s Hole. Having had a number of drinks and “grown quarrelsome and pot-valiant”, George declared that he, his fiddle and his dog would venture into the tunnel and find out the truth of the matter.

Followed by a large entourage, many of them begging him to abandon the challenge, George walked to Cave Gate and declared he’d follow the tunnel “though the Devil himself were at the end of it.” As he entered the cave, led by his dog, he called to the villagers to follow his progress above ground by the sound of his fiddle.

Then he vanished from sight, and the unearthly sound of an unknown fiddle tune rose from beneath. The villagers followed it across the fields until they were about halfway to the castle. At that point the fiddle rose to a nightmarish shriek and stopped. Only silence came from the tunnel.

The people rushed back to Cave Gate just in time to see the dog race out. His tail was gone and his hair singed off, and he ran off into the darkness howling as if all the devils in Hell were behind him, never to be seen again.

Blind George, too, was never seen again, and it was generally assumed that the Devil had indeed been there to meet him. No-one ventured in to find out, though, and soon afterwards the entrance was sealed up, both to deter the foolhardy and to prevent George’s ghost from escaping. It’s said, though, that when snow falls on Anstey the first to melt is always a straight line from Cave Gate to the castle.

Is the story true? Well, there was a fiddler with the surname George living in the parish at the turn of the 17th and 18th centuries. No record survives as to whether he was blind, but he doesn’t appear to have come to the bad end related by the legend, since he’s recorded as having been buried in the churchyard.

In fact, this appears to be part of a widespread tradition connecting the Devil to music, and to the fiddle in particular. There’s a legend found in many different countries and cultures about musicians who were taught to play by the Devil after going to a crossroad at midnight. The best-known version is about the American blues guitarist Robert Johnson, but traditionally it was the fiddle that was the “Devil’s instrument”, and he excelled at playing it.

The story of Blind George and the Devil’s Hole has a character all of its own, though. It’s inspired at least two songs. The Light of Day (which assumes the whole thing was an elaborately staged trick by George) is by the classic folk-rock band Fairport Convention and can be found on their 2002 album XXXV, while a lesser-known song, Blind George by the band Litha, can be found on their website.