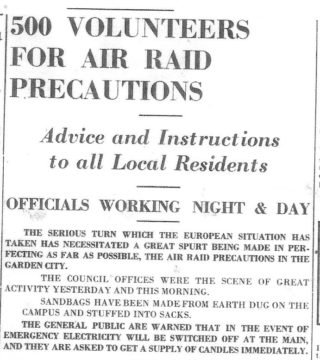 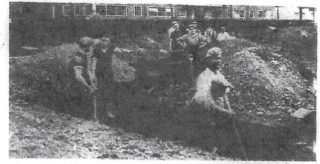 Plan of sleeping arrangement in the air raid shelter 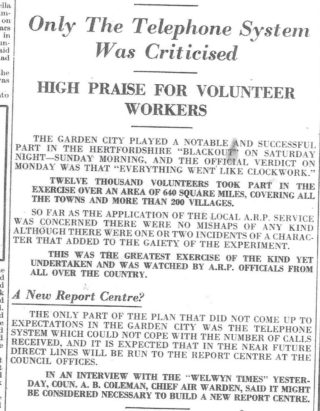 Report on the "blackout exercise" 1938 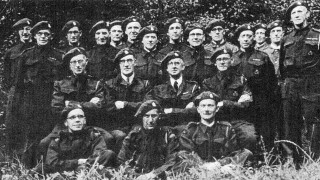 The fear of air raids, should another war be declared, resulted in 1938 seeing the establishment of Air Raid Precautions (ARP).

In Welwyn Garden City, a report in April 1938 noted that considerable quantities of stores and equipment had arrived.[i]  Mr C W M Ludgate of The Old Cottage, Bridge Road was appointed as Air Raid Precautions Officer in September at a salary of £150 pa.  By July 1939, he was working full time and his salary rose to £250.  Cheshunt had made an earlier appointment in April 1938, also at a salary of £250 pa.

Advertisements on the need for volunteers and education of the public appeared in the local press and at a public meeting held at the Corn Exchange in Hertford on 26 April 1938. In addition, the Medical Officer for Hertfordshire booked a stand (at a fee of £6) at the Great Hertfordshire show on  22 and 23 June.[ii]  The need for volunteers became more urgent during the “Munich crisis”.[iii]

The Home Office view was that the best protection for the public was evacuation into open spaces and trenches should be dug in open fields where possible. The trenches dug in Welwyn Garden City on the Campus and at the back of Peartree stores were planned for those caught in an air raid while shopping or en route to the station.[iv]  A gas proof house had been established at St Albans and another prepared in WGC.[v]  In Welwyn, it was thought that tunnels could be driven into the foot of Welwyn hill although “trenching and tunnelling in the hands of the enthusiastic novice can be, and often is, a veritable death trap”.[vi]

An alternative was being trialled at a factory at Rye House, Hoddesdon. Messrs Nissen Building Ltd were experimenting on the construction of an air raid shelter which might be universally adopted as “John Citizen’s protective measure against the deadliest form of warfare – gas and incendiary bomb attacks“.  It was recorded that 25 men had spent 12 hours in a shelter and “showed no ill-effects after this experience.  They were allowed to smoke at intervals and ate a quantity of food.”[vii]

The preparations for war took time and effort. In Welwyn, the ARP volunteers complained that they could only devote time in the evenings and, for those working in London and elsewhere, it was impossible to call on cottages to advise on fitting gas masks etc.   They were sure that the Council would appreciate how reluctant they were have their names associated with an organisation which they know to be utterly inadequate for the advancement of the work in hand.[viii]

Another concern was the supply of equipment and particularly so with a planned county wide ARP exercise planned for the night of 5/6 November 1938.[ix]  This would result in 640 square miles of blackout from 11.45 – 2.30am.  The weather conditions were ideal.  It was a warm, dry and a brilliant moonlight night.  The choice of date allowed Hoddesdon  to let off  fireworks to represent bombs.

The exercise produced mixed results. At  Hitchin, the Home Office observer had “not seen a better organization“.[x]  In Hatfield, the Council recorded the excellent service given by those taking part but noted that volunteers were kept waiting outside the memorial hall in Hatfield (a First Aid post) owing to the hall not being open. Some house lights were not screened and some trains running through the district did not have their blinds drawn.  It was noted that valuable lessons had been learned, notably the inadequacy of the telephone system.

At the monthly meeting of Welwyn Garden City council, Cllr A B Coleman deprecated the facetious manner in which the exercise had been reported in the “Welwyn Times“[xi]  The reporter did see some humour in the exercise, such as:

“A shocking condition of things was at once evident at Burgundy Croft. The road had been blocked by debris, four children had been injured, and, poor little souls, were lying in the dewy grass in a front garden.

Well, we found the “children” leaning up against a fence. Each was about six foot tall, and regrettable as it may sound, each was smoking a cigarette….. the casualties were borne away – this time in a van labelled, inappropriately, we thought, “The St Albans and District Gas Co”!“

The report then turned to the Peartree area where four people were alleged to be seriously injured. In spite of this handicap, the “casualties were able to stand and take a lively interest in proceedings – at least one of them was until and enthusiastic ambulance man bound him up a little too tightly and he fainted“.

Supply of equipment continued to be a problem.  An inadequacy was reported by the ARP Wardens in Brookmans Park.  On 3 October 1939, they tabled a resolution to the effect that after 4 weeks of war the responsible authorities had neglected to equip the trained wardens in the district and if they wanted to retain the good will of these volunteers, they must make good this lack of equipment. A copy was sent to the Home Office.[xii]

[iii] Neville Chamberlain returned to England with his piece of paper signed by Herr Hitler and assured the population of peace in our time on 30 September 1939.