The Buildings of the High Street

The southern end of the High Street looking north, c 1905

The High Street today is a mixture of old and new. In some ways, that’s how it should be, but this hasn’t been an organic process of one-for-one replacement, but a wholesale clearance of old buildings in the 1960s, to be replaced by often rather stark modern flats and maisonettes. The northern part of the street, in particular, has been almost completely destroyed.

The southern section, between Church Lane and Cadmore Lane, has fared a little better, although short stretches of it have been redeveloped. Number One, on the corner of Church Lane, is Hope House, a 1681 red-brick building which acquired its characteristic white plaster front in the 18th century. It’s one of the street’s disturbingly few grade II listed buildings. 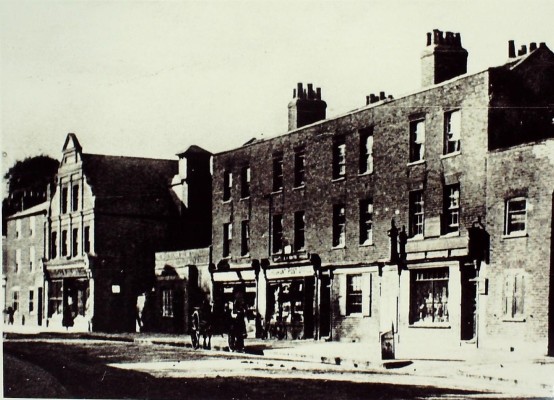 West side of High Street, date not known. The upper floors were family homes

Much of the west side of this section dates from the late 18th to early 19th centuries, with a few older buildings, but some parts have been replaced by modern buildings, including flats where the Haunch of Venison pub once stood. Cheshunt Free Church dates from 1889, when it replaced an earlier chapel built a century earlier. It belonged to the Countess of Huntingdon’s Connexion, and is now part of the United Reformed Church.

The east side originally contained a mixture of shops and substantial houses — a few of the former still stand, but this side hasn’t done as well as the west. The sixties blocks Edwick Court and Heaton Court respectively replaced Edwick’s Nursery and Heaton House, the former an 18th century mansion, with the Edwicks’ Penton House nearby. 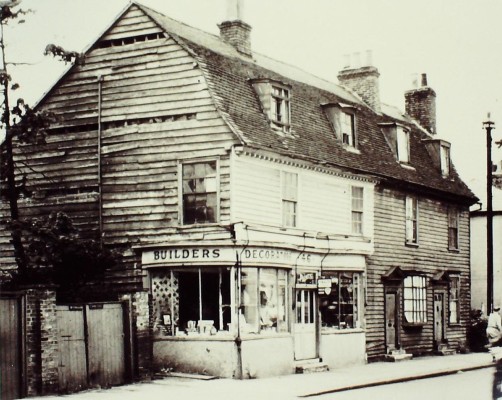 Timber-clad buildings on the east side, in front of the modern car park, 1959

Further along, Effingham Place and Effingham House stood back from the High Street, 16th and 18th century respectively. I believe it was here that I recall walking past a fence of iron railings with gardens beyond — there’s now a car-park and a row of sixties shops there, with more of the same on either side of Cadmore Lane. On the south side of Cadmore Lane, these replaced a building known as Cheshunt House.

North of Cadmore Lane used to be a mixture of shops, pubs, cottages and several larger houses, mostly ranging from the 16th to 18th centuries. Much of this was demolished in the early sixties, but in some cases it was a few years before anything was built in their place, and a feature of the High Street when I was growing up was stretches of advertising hoardings masking the empty ground. 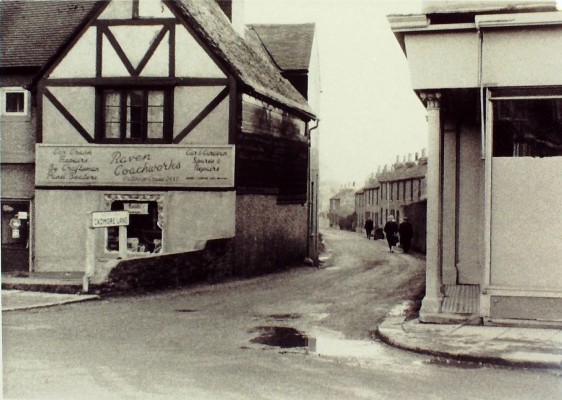 On the west side, the blocks of maisonettes were built in a brutalist black-brick style — I understand they were quite pleasant inside, but the exterior made them look like barracks — together with a tower-block that had to be demolished when its design was found to be unsafe. The blocks to the east are somewhat pleasanter to look at, but still fairly anonymous. 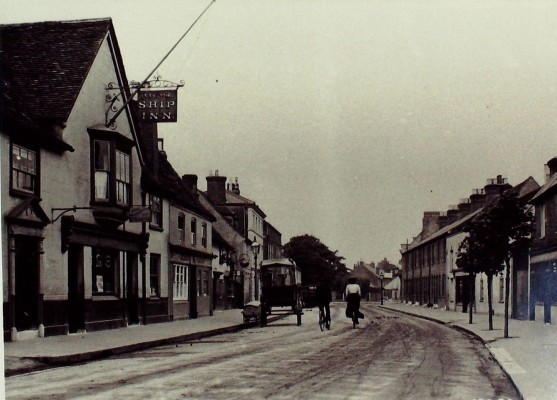 The only survivors from this part of the High Street are four 17th century houses standing together on the east side, all grade II listed. Number 138 (Hillview) was for many years the home and surgery of a doctor’s practice. There’s no evidence of it in 1851, but in 1911 the doctor there was Walter Frederick Clark. By the sixties the practice was run by Dr Alan Watts, after which Dr Ahmed took over. The building is now offices.

Dr Watts’ son was my best friend, so I spent a good deal of my childhood at Hillview. It was a substantial house inside, with a stone-floored kitchen, a basement and an attic. One part of a stable range had been converted into a waiting room, and patients had to cross the courtyard to the surgery — hardly ideal on a wet winter evening.

Immediately to the south was a vacant lot, separated from the street by advertising hoardings, that we referred to simply as “the waste ground” and played on. This had previously been another substantial building called Bradford House, though I’ve no information about when it was either built or demolished. 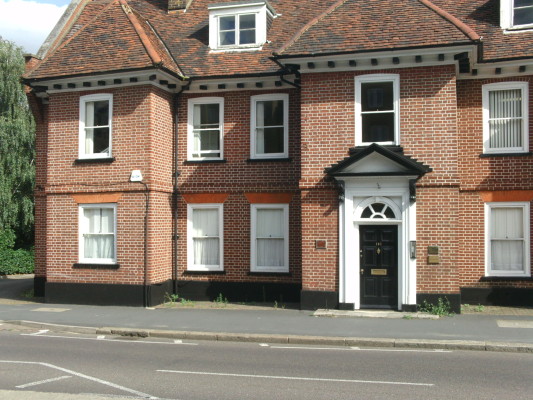 Number 140, Beechholm, is of similar age and type. In 1911, this was the home of the Misses Boyd, two spinster sisters of private means, but by the sixties was a hotel run by a half-Polish family general known as the Lechs, although that was actually the husband’s first name. This too is now offices, with a new development behind it.

Number 142, The Orchards, a plain brown-brick house described on the listing schedule as “Included for group value”, was an annexe of the hotel. It was the home in 1911 of George Laing Paul, of the Paul’s Nursery family. Number 144, Sunnyside Cottage, is the most attractive of the group, although also described as “Included for group value”. This was never such a prestigious house, being occupied in 1911 by James Matten, a labourer.

Much of the east side was of similar age, though a few of the buildings were wooden: a mixture of shops, cottages and three pubs. Sharpe’s fish-shop, in particular, was a fine building with a plaque bearing the date 1689. 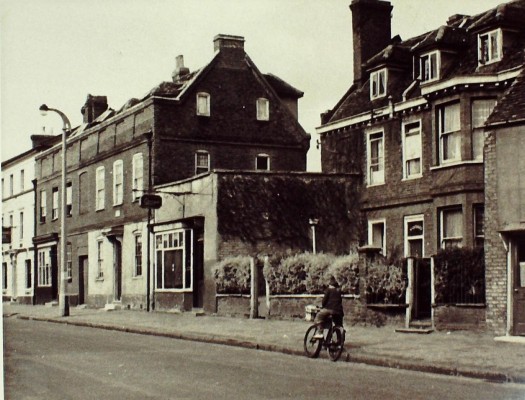 West side of High Street, with St Gothards standing back, 1948

The west side was the same sort of mix, also with three pubs, ranging from the coaching inn the Red Lion to the cottage-like “dive”, the Two Brewers. Paul’s nursery and the family’s 17th century house were demolished to make way for the building of Warwick Drive, and most of the rest was replaced by the maisonettes.

I do recall one of the houses on this side of the road from the early sixties, although I haven’t been able to pinpoint which it was — possibly the house to the immediate north of St Gothards, a private infants school that was gone by the time I remember. This house had stood derelict for some time and was the perfect playground for children. Of course, we were strictly forbidden to go in — and of course, we ignored that. 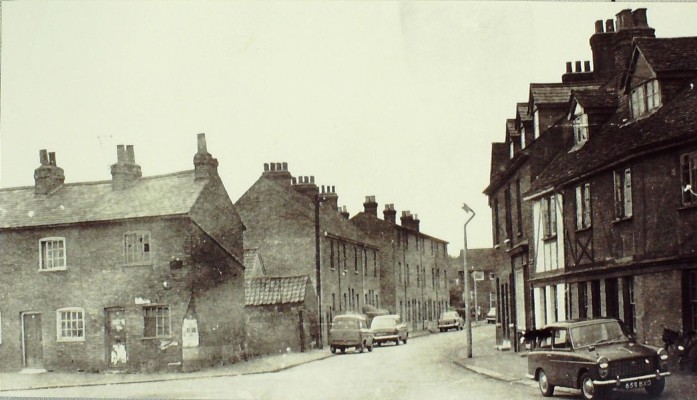 The row of cottages turning onto the south side of Brookfield Lane was demolished in the early sixties, and for many years the land was used as a wintering ground for a travelling funfair, but eventually the White House, a block of supported housing flats, was built on it. Another more recent block near it was named Sir Cliff Richard Court. The matching cottages north of Brookfield Lane, including the building that had been the Two Brewers, came down a little later and, after a time with the ubiquitous advertising hoardings, were replaced by flats. 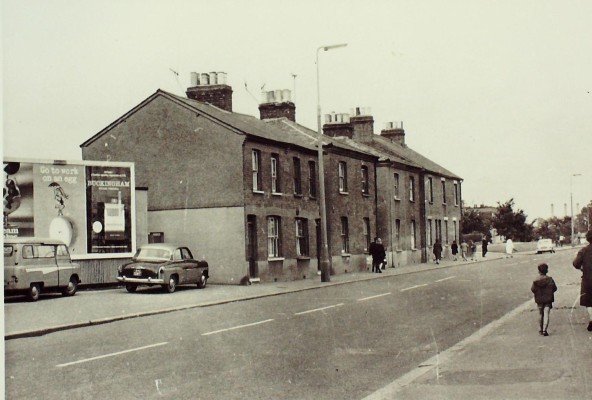 Some patches of the High Street — notably the west side of the southern stretch and the group consisting of numbers 138-144 — survive to give a flavour of what the whole place was like back in 1911. For the most part, though, it survives only in old photographs.