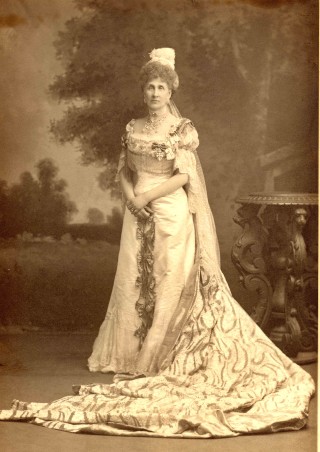 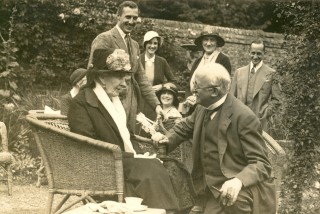 Edith's 90th birthday, with Edwin Lutyens and other members of the family
Knebworth House Archives

On Friday February 1st 1901, the coffin containing the body of  Queen Victoria began its journey from  Osborne to its final resting place in the royal Mausoleum at Frogmore.  One of the two ladies-in-waiting accompanying the body was Edith, Dowager Countess of Lytton, whose vivid accounts of the events and the days leading up to them, told in letters to her daughters, survive in the Knebworth House archive.

The Queen died at a quarter to seven on  the morning of Tuesday January 22nd 1901; Edith was not “in waiting” at the time,  but  the news spread quickly and within an hour had reached the London house of her daughter Emily Lutyens where she was staying.   Edith admitted to it being “ a shock even with all the preparation” and her  thoughts were with the new King and “what a trying day he must have had”.

By the end of the week Edith had been summoned to attend at Court and her fellow Lady in Waiting Harriet Phipps wrote  “I am so glad that you are coming…..You and I have the great  privilege of attending our most beloved Queen on her last journey.  We cross on the Alberta, spend the night  in PortsmouthHarbour ..on board a yacht..& go on to Windsor till the last duties are fulfilled.”

Edith arrived at Osborne on Wednesday 30th January and   “went at once to the Chapel where our beloved Queen’s coffin is,  so simple & low down & a bit of her own dining room ….screened off into a small chapel . Most perfectly done & nothing painful.  A nice  red glow and the soldiers in their red tunics not severe………. But it was very upsetting “

Osborne was crowded, the Household in a state of shock and exhaustion and buzzing with reports and stories  The Prince of Wales had sat 16 hours with his dying mother; the Kaiser “had been so perfect to everyone, & so gentle & kind with no swagger of Emperor about him”;the Duke of York was ill with measles.

Edith’s letters give the impression of a Court destabilised by the removal of the head around which it had revolved for so long. Members of the Households of the dead Queen and the new King were mixed together and roles were uncertain.  No wonder then that clear orders were hard to obtain. The Bishop of Winchester confided to Edith that   “The Queen’s own diary about her own first Council meeting was  the best guide they had for knowing what to do for the new King”

Meanwhile the ladies of the Household finalised the details of their mourning dress, resolving to wear plain skirts for the walk to Cowes in case of wet weather, with long front and back veils. As an added precaution against cold Edith planned to put cotton wool on her chest. In the event, the day was bright and clear and the procession both impressive and moving.

“No words can express the beauty of the day and of the procession  from Osborne to Cowes & from Cowes to Gosport.  The colour of the Crown, the Royal Standard (and) Union Jack put in perfect folds – the white & gold satin pall over the coffin all looked so splendid & then all the uniforms.  Only the Princesses & ladies were in the  dreary black & very bad it looked”

The sound of the tolling bell

Led by pipers, past military bands playing Chopin & Beethoven funeral marches, the procession made its way to the harbour, where the coffin was placed under a red canopy on board the “Alberta”, guarded at each corner by an Naval ADC. Edith & Harriet Phipps remained in attendance on deck as the ship sailed from Cowes to the sound of a tolling bell, the singing of a hymn and gunfire from the attendant ships.

The following day the journey continued by train to London and carriage drive through the capital to Paddington Station for the final stage to Windsor.  From the comfort of her carriage Edith was moved by the sight of the crowds who lined the streets in the bitter cold to watch the procession pass.  Members of her own family were among the crowd; her daughter Constance, watching from a window on the route found it      “the most heart & soul stirring thing I have seen.  Jubilee can’t compare with it to my mind because what was uppermost all the time was not the splendour of the show but the intensity of loyal & devoted feeling which seemed to fill every…. man & woman in that enormous, monotonously black crowd. “

On arrival at Windsor station the ceremonies hit the only recorded hitch.  The horses, that were to have drawn the Gun Carriage, kept waiting in the cold, kicked and reared, refusing to enter the shafts. At the suggestion of Prince Louis of Battenberg sailors on guard at the station pulled the carriage instead, eighty at a time, thus establishing a tradition that survives to this day.  Edith thought the innovation to be “so suitable and effective”.  She was less impressed by the “rather pompous” service which followed in St. George’s Chapel, led by two archbishops but lacking in “nice tender hymns”.

It had been a long and tiring day for Edith, who had risen at 6.00, and she did not find the Court formalities easy.  On meeting the King, she told her daughter,

She was glad to be able to go into dinner with Lord Salisbury, an old friend and Hertfordshire neighbour “because at Court he is never alarming”.

Edith’s duties to her dead mistress ended the following day, Sunday 3rd February, with the quieter ceremonies at Windsor.

“Now all is over! And the beloved Queen is laid to rest in her last resting place and at peace, and this last walking funeral and beautiful simple procession has been as touching and thrilling as the one from Osborne to Cowes……….the Procession going across the Royal Quadrangle through the Queen’s Arch and down to the long walk was  most impressive with the flashing minute guns.  Then at the Mausoleum was so quiet & orderly, and the Service very touching……When all was  over the King, the Emperor, the Princesses and the Princes walked up …….and knelt to take a last farewell, & then the ladies and gentlemen did the same & all filed out in perfect order”

Although Edith was soon free to leave Windsor and return home to Hertfordshire, her days in royal service were not over.  Her desire to retire from official life was thwarted by Queen Alexandra’s invitation to continue in Waiting.  – “Had to accept” she later jotted across the top of her draft letter of acceptance.