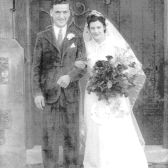 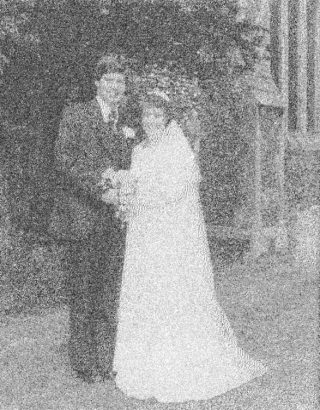 The oldest of the three dresses was worn by Susannah Newman when she wed Mr Howlett in 1918 at Elstree in Hertfordshire.  Susannah Newman was originally from Little Berkhamsted near Elstree.  The couple met and married there, but moved to Hatfield in 1927.  Mr Howlett was a farm worker, but moved the family to Hatfield, to work as a gardener for Mr Scott-Murray, a member of the local gentry who lived at Newlands on the Hertford Road.  Taking this job enabled him to move the family out of its tied cottage near Elstree and move to Clarkes Road in Hatfield.  The family later moved to Dell Field Road.  Their daughter Edna was born in 1922.  Susannah’s dress was handmade in white silk and decorated with fringing and tassles, and accessorised on the day, with a plaited silk belt.

The second dress was worn by Susannah Howlett’s Daughter, Edna on her wedding day in April 1943 at St. Ethelreda’s Church in Hatfield.  She was born in Elstree in 1922, but moved to Hatfield in 1927.  Edna’s husband Dennis Hurley was born in 1920 in Barry, Wales.  He left school at fifteen to find work, but the recession meant that there was no work available locally.  So his Mother took Dennis, his three older brothers and younger sister to live in Hatfield.  She rented a house in Green Lanes for them to live in.  His Mother returned to Wales, but came back to live in Hatfield in 1941, when Dennis’ Father died.  The family later moved to a house in Lemsford Road.  In 1935, Dennis began working for De Havilland in the drawing office, for which he was paid 17s/6d a week.  When war broke out he moved into print distribution.  After their marriage the couple moved to rooms in Broadacres (Green Lanes estate) and were later allocated an aluminium bungalow on Chelwood Avenue.  Their first child, David was born in 1944 and their second, Sylvia was born in 1948.  Edna sadly passed away in 2004.  The dress was full-length in cream cotton lace with a synthetic satin under-dress.  It has been decorated with satin flowers and pearl beads.  The dress was worn on the day with a matching headdress and corsage style brooch.  The headdress has been decorated across the crown with wax flower heads, stamens, petals and fabric leaves.

The third dress from this collection was worn by Susannah Howlett’s granddaughter, Sylvia.  Sylvia grew up in Hatfield, but now lives with her husband in Tuffley in Gloucestershire.  They married in May 1976 at St. Ethelreda’s Church in Hatfield.

These three dresses are on display at Campus West, Welwyn Garden City from July 2009.