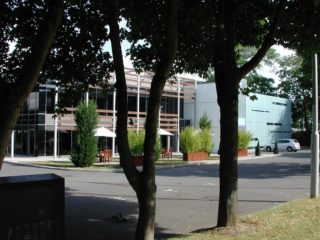 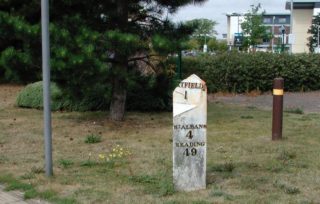 The 1911 census enumerates two families living at Horseshoes (now Smallford) and Ellenbrook.  In one household there were two boarders who were employed as a green keeper and golf labourer.  In the other household there were a golf professional and a horse driver at a golf club, which the census describes as the Hatfield Road Links.

The dawn of the 20th century was a period of building development along the road from St Albans to Hatfield.  The air strip would later be laid on part of the former Harpsfield Hall Farm – Ellenbrook Fields occupies part of this land today.  A row of large mainly detached homes began to line the airfield side of St Albans Road West from opposite Ellenbrook Lane as far as the access road to the police station opposite the Galleria.  None of these homes remain today.

The occupiers were in well-paid jobs: banking, accountancy and other City-based careers.  This was the clientele the developers were anticipating, and on the back of the promise of a large number of similar homes – most of the rest never materialised – persuaded the Great Northern Railway Company to construct a a halt at Nast Hyde for residents to make the connection at Hatfield for trains to the City.

A golf club would be a further social benefit to the residents and was likely to be the kind of facility provided by a developer.  So, where was this club?

Beale’s Hotel:  The original house on this site was called Ellenbrook House, renamed Ellenbrook Club in the 1930s and taken over by de Havilland Aircraft Company.  Subsequently it became Hatfield Lodge Hotel, and the current building is Beale’s Hotel.

Site of Mile House: Behind this milepost for the Reading & Hatfield Turnpike was a substantial house called, appropriately, Mile House.  It stands beside the Mosquito Way roundabout and opposite the Comet Hotel.