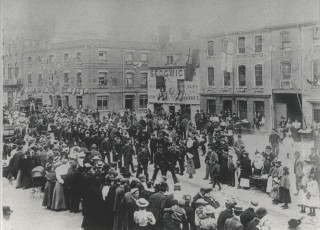 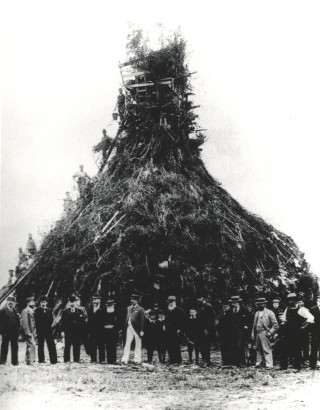 60 years after she was crowned as Queen in 1837, Britain celebrated Queen Victoria’s Diamond Jubilee. 22 June 1897 saw a wave of parties and celebration. However unlike the Golden Jubilee, the Diamond Jubilee was not mere celebration of the anniversary of Victoria’s coronation, but also of the entire British Empire.

Watford in Hertfordshire, in particular was a town which wanted to impress with its celebration of the Diamond Jubilee. Banners criss-crossed the High Street with British flags hung high from windows and flying from flag poles attached to walls. Masses of people gathered in parks and on main streets in order to watch the procession go by, or just to mill about with others whilst showing support for their Queen.

Residents of the quieter side streets had competed with each other in order to have the best decorated houses seeing it as a light-hearted competition that they wished to win.
The latest invention of the Victorian era, the motorcycle, was covered in flowers and greenery and fronted the procession which went through the town, which sparked a lot of interest in the town as well as showing Britain at its best with its new inventions.

One of the large events which occurred here was the impressive building of a massive bonfire (around four and a half times the size of the men who built it) which presumably was set alight in honour of Queen Victoria as part of the procession. Fireworks and bonfires were one of the varieties of ways in which local towns and villages decided to celebrate the jubilee.