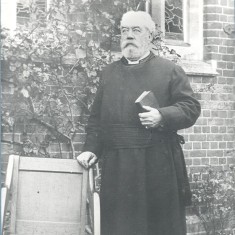 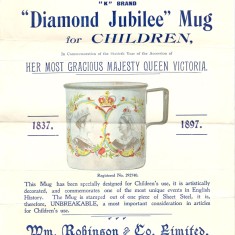 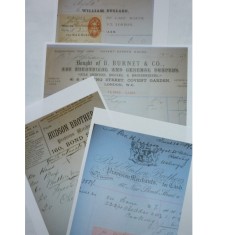 Bills from London suppliers to the Jubilee celebrations
H.A.L.S. 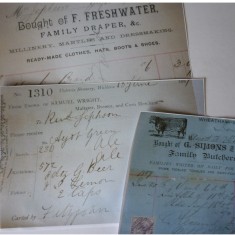 Local suppliers to the celebration
H.A.L.S. 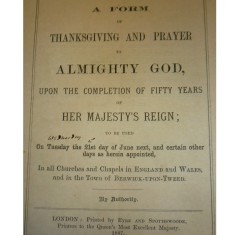 The order of service
H.A.L.S. 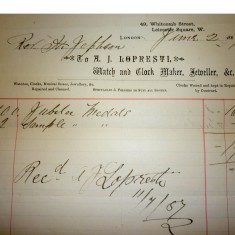 The Hertfordshire Mercury reported that “The Queen’s Diamond Jubilee was celebrated in this village on Thursday, June 24th, and although heavy downpours of rain militated somewhat against the enjoyment of out-door festivities, the proceedings passed off most successfully.”

Taking a close interest in matters was the Earl Cowper who wrote to the rector and Rural Dean, the Reverend H Jephson, that “I think that each parish ought to get up an entertainment for the people on the occasion of the Jubilee.  Do you not?”  Later came the command.  “Could you come over to Panshanger on Saturday at 3 o’clock to meet the clergy and some of the gentry of the neighbouring parishes to discuss the Jubilee entertainment?”  Earl Cowper contemplated paying two thirds of the expenses at Ayot, adding that “at all costs Lord Mount Stephen must not be asked for more than one third.”  (As he was a self-made millionaire, living at Brocket Hall, this was clearly not a reflection of his poverty).

The day followed the standard format of church service. Mrs Jephson presided at the organ and was assisted by the Codicote brass band. Dinner for 250, sports in the field (in the bright intervals) and a sumptuous tea followed.

Some of the supplies came from London such as the 20 dozen buns and tarts which were supplied by William Buszard, Confectioner and Cake Maker of 197 Oxford Street, the cheese from the Hudson Brothers of New Bond Street and the 12 Flags from B. Burnet & Co., Art, Theatrical and General Drapers of Covent Garden at 8/10d.  In addition, 100 Jubilee medals were bought from H.J.Lopesti, Watch and Clock Maker, Jeweller, &c of Leicester Square. Local tradesmen were not overlooked.

More flags were procured from F. Freshwater, Family Draper (Millinery, Mantles and Dressmaking – Ready-Made clothes, Hats, Boots and Shoes) of Welwyn, G. Simmons and Son, Family Butchers of Wheathamstead supplied Veal, Loins of Pork and rounds of Beef and Samuel Wright, Maltster, Brewer and Corn Merchant of the Victoria Brewery, Walkern, supplied 2 barrels of Ale (one shilling each), ginger beer and lemonade.  The plum puddings were supplied by the Hon. H F Cowper and others – made at home.

Mr James Young, in charge of the sports wrote the following day: “I think all concerned seemed to be pleased with the results.  Of course there were the inevitable disappointments and a few grumblings at my efforts but that is only the usual outcome of trying to carry out a programme of sports.  Fortunately I am not very thin-skinnned!  ….. We hope to have the quoit match and the tug of war tomorrow (Saturday) evening and those events finish the sports programme, which, I hope, added to the enjoyment of the Jubilee Festivities.”

The subscription list was headed by Earl Cowper (£20) followed by Lord Mount Stephen and the Reverend Jephson (£10 each).  After expenses, £1.1.0d was passed to the Herts Relief Fund.