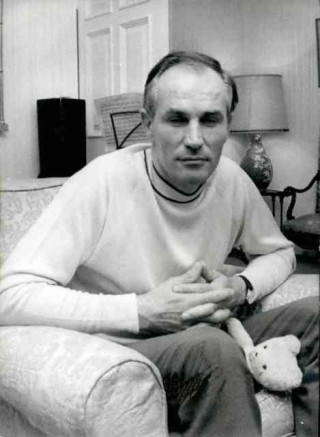 Lord Sanderson of Ayot, the 2nd Baron, pictured in 1971 at his Bayswater home

The 1st Baron Sanderson of Ayot was created in the Birthday Honours of 1960 when Basil Sanderson was ennobled for services to industrial relations in the shipping industry.

Basil Sanderson served in the First World War in the Duke of Lancaster’s Own Yeomanry and was mentioned twice in despatches. During the Second World War he was Director of Shipping in Port in the Ministry of Shipping (1939-41) and Head of Port and Transit Control, Ministry of War Transport (1941-45). After the war he was chairman of Shaw Savill from 1947 to 1963 and a director of the Bank of England from 1943 to 1965. In 1967 he published his autobiography Of ships and sealing wax.

Lord and Lady Sanderson are buried in the churchyard at Ayot St Peter.

The 2nd Baron Sanderson – the eldest twin son of the 1st Baron – disclaimed the title “because I don’t think hereditary peerages have a place in the modern world”. A newspaper announcement of 1st October 1971 stated:- “Lord Sanderson of Ayot, the 2nd Baron, has disclaimed the title to which he succeeded on the death of his father almost seven weeks ago. He is the eleventh peer to take this step since it became possible under the 1962 Peerage Act. As a result of the disclaimer, sent under the terms of the Act to the Lord Chancellor, he reverts to being known as Dr. Alan Lindsay Sanderson. He is a psychiatrist working as a Research Fellow in the psychiatry department of Birmingham University.”