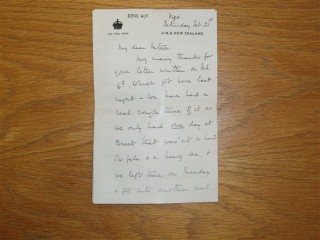 To listen to the audio clips, click play on the bar below the first image on the right.

At this time the Royal Navy was training to be ready for the anticipated war with Germany. The Kaiser had ordered the building of a fleet of ships capable of challenging the British at sea, so the British were on exercises in The Bay of Biscay, The North Sea and the Baltic.

Very many thanks for your letter written on Feb 16th, which got here last night – we have has a real rough time of it, as we only had one day at Brest that wasn’t a hard S W gale and a heavy sea, and we left there on Tuesday and got into another real snorter. However we had our battle with the combined Fleets, which rather ended in a fiasco, as someone made a great blunder and didn’t conform to the rules, with the result that we didn’t get a good fight. However it was all very interesting and very exciting dashing about at 20 knots in thick, vile weather and with a big sea. These ships are perfectly splendid. On account of the weather we all arrived here a day early – namely on Thursday evening – and I must confess I was very glad to get a quiet night after two very rough ones.

I am awfully sorry to hear about your ankle and hope it will soon be right – you didn’t say how you did it. I am glad to see S. Bucks went all right and better still that Masterman has been knocked out. Next time you write, or any of the family, will you let me know Gavin’s address as I expect he would like to get letters, being all alone. I get good news from Coog thank goodness. I wonder what you will think of my prospective appointment and am sure none of the family will say a word about it, as I shouldn’t like it spread about until I have been officially offered it. It is the very best stepping – stone to employment as an Admiral, which is what I am so pleased at.

It is quite odd to think I have now been nearly a fortnight from England and on account of the weather I havn’t yet had plain clothes on, however I hope to land this afternoon and go for a run in the Captain of the Colossus’ motor. I left mine at St Anne’s, but my Torpedo Lieutenant has got a sister car to mine and has brought it with him. My new Steward seems quite a success so far, and I like him, but of course it is early to say definitely. We have got 2 squadrons here: our own of 4 ships and the 1st Battle Squadron of 4 ships. And there are also 4 German ships here, which we could blow out of the water in 5 minutes if necessary.

Tell Mother she must try to come down to Plymouth while I am there between 26 March and 14 April, otherwise I feel she will never see the ship – and I do want her to.

My best love to all at Gaddesden.

Believe me your ever affectionate son,