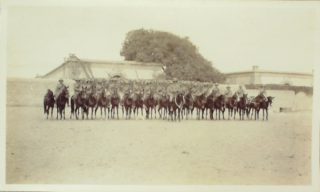 My friends at Cambridge were  –

I went up to Cambridge again for the Long Vacation term as I was trying to get the Agricultural Diploma in 2 years instead of 3, but the outbreak of war in August 1914 stopped my University career.  I was called up directly being already an Officer in the Herts. Yeomanry.

Went to stay one week-end at Newman Paddox with the Denbighs their son, Henry Fielding being a friend of mine.  Huge house full of lovely pictures which although an impoverished family they don’t or can’t sell.  Several attractive daughters.

It was while I was at Cambridge that I received a wire on August 5th at 3 a.m. to report at Watford immediately, so I went straight off to Nottlers1 to collect my kit.  In anticipation of mobilisation I spent a day in London but managed to buy a sward.  Eventually bought a R.I.C. revolver2 at an ironmongers in Watford.  A squadron of the yeomanry started mobilising on August 5th at the Drill Hall, Watford, but as there was nothing much for them to do (why I do not know) we went to Cassiobury Park to play cricket which seems a funny way to spend the first day of a European war.

Father was appointed a Government buyer of remounts, or appointed himself and I cannot think how we would ever have got the Yeomanry mounted if he had not done this job.  He went to Tring Show one day and commandeered all the horses being shown including a lovely heavy weight hunter belonging to Sir Arthur Cory Wright which Bill Leslie3 took over as his charger.  I had as my charger a bay gelding that Mother and I had bought from Lady Suffolk during the previous July.  He also got 10 from Lady Wernner [?] and 7 from Lady Rothschild.

Father, Thurstan4 and I lived in the Clarendon Hotel at Watford.  We all slept in one room.  Father’s last remark on the first day “Damn the Germans”.

Father managed to get enough horses to mount the regiment in 2 days.  All these horses had to be branded and fitted with saddles and bridles, the men issued with uniforms, rifles, equipment.  It was not a bad effort getting all this done in so short a time with only one regular permanent Staff Sergeant Major who knew anything about the issuing of equipment, etc.

On August 8th we left Watford for Mountnissing in Essex by road.  The majority of the horses were quite unfit, some just up from grass, only a minority of the men could ride properly but luckily we had been in camp already that summer so they were better trained than they would otherwise have been.  I was left to bring on the transport with my troop.  I had several G.S. waggons with wild horses in them which we were doubtful had ever been in harness before.  We spent two days en route spending the first night at Enfield where I arrived soon after the remainder of the squadron at 8 p.m.  All the horses were tied up on a long rope in a disused brewery as there was nowhere else to put them

I arrived to find my squadron leader, Hugh Wyld5, unable to speak for fatigue.  He sat on a bale of straw smoking his pipe, which kept on going out, and saying to Thurston4 and I “ I leave it all to the Hibbs”.  So the Hibbs got on with the job.

Most of the horses got loose in the night but only one was kicked.

On arrival at our destination we found that we were supposed to be part of a force guarding the East coast against invasion.  I found that I was billeted at a house called “Truelove” which belonged to Jack and Alice Wigan.  Strange coincidence.  All my troop slept comfortably in the polo-boxes and I lived in the house with Jack’s servants looking after me.

The Yeomanry were only enlisted for Home Defence so they all had to be asked if they would volunteer for foreign service.  80% of the regiment volunteered immediately and all except one man in my troop.

We eventually moved to Bury St. Edmunds where we were stationed on Lord Cadogan’s Estate.  We stayed there, drilling and trying to learn to be soldiers until September 10th when we started for Egypt.