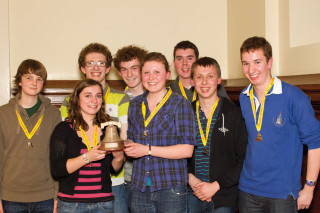 There were lots of events happening all over London. One of the Main events was the first National Youth Striking contest, which was to take place at St Saviours Pimlico.

As this was a National event Hertfordshire entered a team.

The rules stated that each team of Bellringers had to consist of ringers under the age of 19, and a test piece of ringing would be judged.

The ringing would start at 10am in the morning and 12 teams from around the country took part.

Hertfordshire won and carried off the trophy for the best ringing of the day.

The ringers were: (left to right)